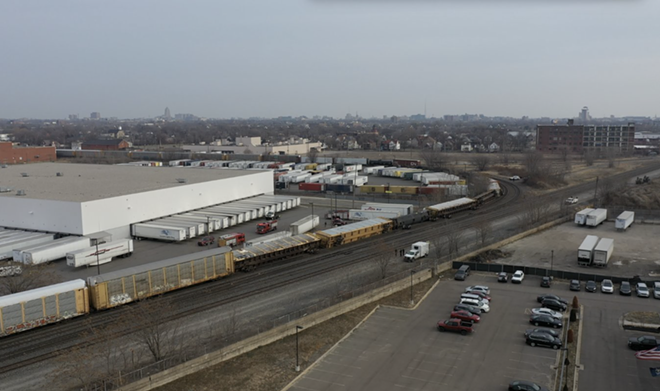 A train carrying hazardous materials derailed in Southwest Detroit on Thursday morning, but officials say there’s no risk to the public.

About 15 of the 151 train cars derailed at 9:45 a.m. just south of Michigan Avenue, with one leaning over a bridge above Scotten Avenue near Clark.

Those containing hazardous materials have not derailed, officials said.

The Canadian National Railway said it’s investigating what caused its cars to derail.

“CN crews are responding to an incident involving a CN train that occurred this morning in South-West Detroit,” the company said in a news release. “Preliminary information indicates that approximately 15 railcars derailed in multiple positions shutting down vehicular traffic on Scotten Ave. At this time, there are no injuries, no fires and no loaded railcars carrying dangerous goods reported to be involved. CN would like to thank first responders present at the scene of the incident and would also like to apologize for the inconvenience caused. The cause of the derailment is still under investigation."

Cleanup is expected to take four or five hours. On Twitter, Amtrak said it will be transferring passengers on buses.

Health scares are nothing new in Southwest Detroit. On Thanksgiving Eve, a riverbank containing hazardous materials collapsed into the Detroit River.