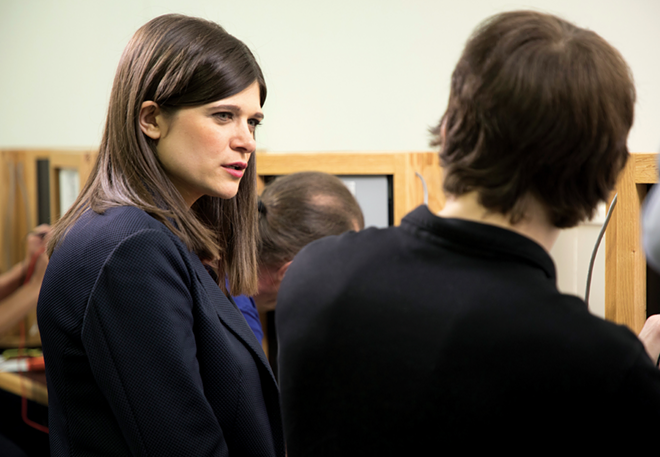 A lot of eyes are on Rep. Haley Stevens.

Of the seven Democrats representing Michigan in the U.S. House, the freshman from Rochester Hills is the only one who has not declared her intention to vote in favor of impeaching President Donald Trump.

Stevens is one of two Democrats representing districts that Trump won in 2016. The other Democrat, Rep. Elissa Slotkin, of Holly, announced on Monday that she supports impeachment, making Stevens the lone holdout.

Stevens has faced relentless pressure from Republicans. In October, Michigan Republican Chairwoman Laura Cox and about 35 Trump supporters slammed Stevens at a news conference outside of her Rochester Hills office.

Presidential Coalition, a group led by conservative activist David Bossie, has targeted Stevens and six other Democrats in swing districts as part of an expensive ad campaign.

Stevens’ spokesman Blake McCarren told Metro Times on Monday afternoon that the congresswoman “has not announced how she will vote yet.”

In late September, Stevens was the last of the seven Democrats to support an impeachment inquiry. Stevens told Politico last week that the impeachment vote has been “a painful moment.”

“I’m keeping an open mind, reading through the articles and talking to my constituents,” Rep. Haley Stevens of Michigan said. “But one thing is very clear — and this is how I felt when I voted for the inquiry — is that we can’t be divided on the rule of law. This is obviously a painful moment.”

Stevens takes a tough stance against Trump on her campaign website: “Now is the time for bold and courageous leadership. We must hold Donald Trump accountable for his lack of defense, corruption, open bigotry and attack on basic facts and science. I full intend to stand up to the Trump Administration.”