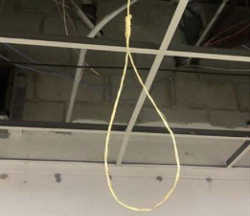 Detroit police are investigating the discovery of a possible noose hanging from a ceiling in the lobby of the 11th precinct building on the city's east side.

A city worker found the loop while removing ceiling tiles as part of a renovation project. An officer posted a photo of the suspected noose on social media. A supervisor has since removed the dangling object.

Some officers believe one of the employees working on renovations tied the noose to a rafter after he was caught on surveillance keying a Black officer’s car, WXYZ reports.

Police declined to discuss the issue until the investigation is complete.