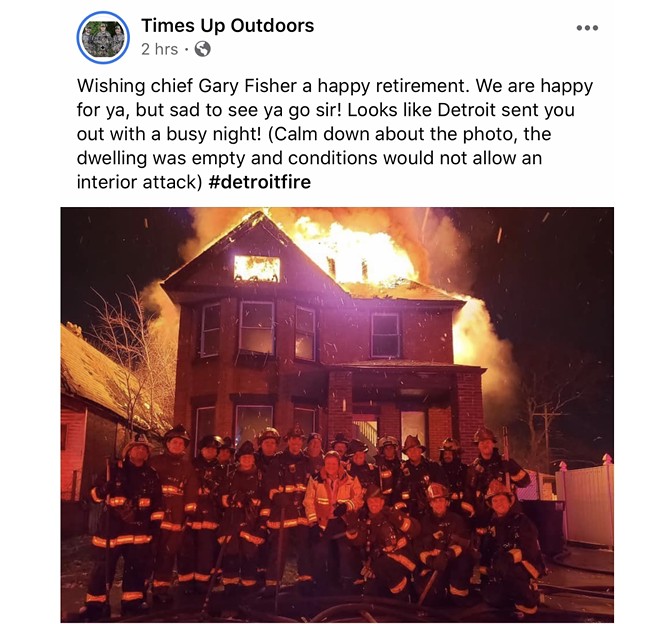 Grinning Detroit firefighters who posed in front of a burning house for a group photo on New Year’s Eve have responded to criticism by claiming the home was abandoned.

The home is owned by 70-year-old Dorothy Higgenbotham, who raised her family in the house.

“They just let it burn to the ground … Eighteen men and none of them did anything,” son Deonte Higginbotham, 21, told the New York Post. “All of them need to be fired.”

The photo was posted on at least two Facebook pages, including one operated by three Detroit firefighters. According to the firefighters’ page, Times Up Outdoors, the photo was taken to celebrate a fire chief’s retirement.

“Wishing chief Gary Fisher a happy retirement. We are happy for ya, but sad to see ya go sir! Looks like Detroit sent you out with a busy night!” the post read.

The post added, “Calm down about the photo, the dwelling was empty and conditions would not allow an interior attack.”

A GoogleMaps image from May 2019 shows the house was well-maintained.

Dorothy Higginbotham  who suffers from Alzheimer’s, was not home at the time because the house was being renovated, her son said.

“She’s really sick right now,” he said of his mother. “We were trying to get the house remodeled” because of her illness, he said.

The fire was deemed suspicious and is under investigation. Curiously, the home is in a largely vacant area of southwest Detroit that is expected to be wiped out for the new Gordie Howe Bridge.

"There are a lot of ways to celebrate a retirement. Taking a photo in front of a building fire is not one of them," Smith said in a statement. "We will investigate this matter and follow the facts where they lead us. If this photo is verified, discipline will be in order."