U.S. Rep. Rashida Tlaib is calling on the Environmental Protection Agency to help investigate and clean up a suspected contaminated property in Detroit that is owned by the man responsible for the green ooze that spilled onto I-696 in Madison Heights.

Earlier this month, city officials discovered a green and red liquid in open pits at a block-long abandoned building on 5900 Commonwealth St. near West Grand and Rosa Parks boulevards on the city’s west side. The building is owned by Gary Sayers, who was sentenced to a year in prison for illegally storing hazardous materials at Electro-Plating Services in Madison Heights, the source of the green ooze that was contaminated with the toxin hexavalent chromium. Sodium cyanide and trichloroethylene also were found on the site. 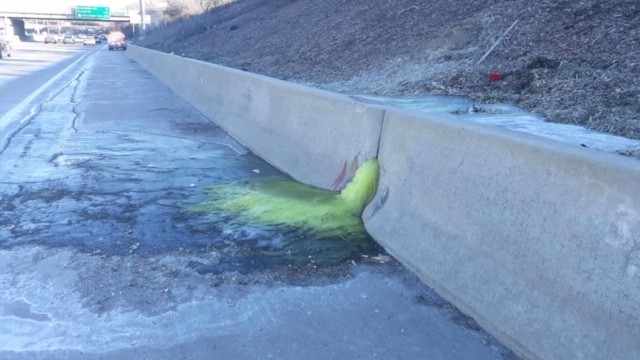 The latest discovery has prompted concerns that environmental hazards are lurking at the Commonwealth building. Old industrial equipment is strewn across the property.

The Michigan Department of Environment, Great Lakes and Energy is testing chemicals found at the site.

“According to media reports, multiple pits of colorful liquid, assumed to be hazardous, have been found at the Commonwealth Industries building at 5900 Commonwealth in Detroit,” Tlaib said in the letter sent to EPA Director Andrew Wheeler on Wednesday. “This is in addition to what EPA regional officials have called an 'unprecedented' level of hazardous waste mismanagement by Mr. Sayers over a period of more than 50 years, including a callous mishandling of dangerous sodium cyanide, trichloroethylene, and hexavalent chromium. EPA has conducted emergency clean-ups at Mr. Sayers’ Electro-Plating Services property before, and I am requesting that EPA offer emergency clean-up assistance to the state of Michigan for the building at 5900 Commonwealth in Detroit given its close proximity to homes and the Henry Ford Medical Center.”

Tlaib, whose district includes the building on Commonwealth, has been a strong advocate of clean air and water since she was in the state House from 2009 to 2014. In 2013, residents were alarmed by the discovery of mountains of black ash, called petroleum coke or "petcoke," along the Detroit River. Petcoke is a hazardous byproduct of Marathon's oil refinery process and is so dirty it can't be burned in the United States. A company controlled by the billionaire brothers Charles and David Koch was buying the petroleum waste and selling it on the international market. Residents spotted trucks hauling the ash without an enclosure to prevent it from blowing into the neighborhoods.

In an act of civil disobedience, Tlaib, a state representative at the time, trespassed on the site to gather samples to be tested. The independent lab found samples of hazardous compounds, including vanadium and selenium, both of which pose serious health risks. Exposure to selenium can lead to bronchitis, nausea, headaches, shortness of breath, vomiting, abdominal pain, and an enlarged liver.