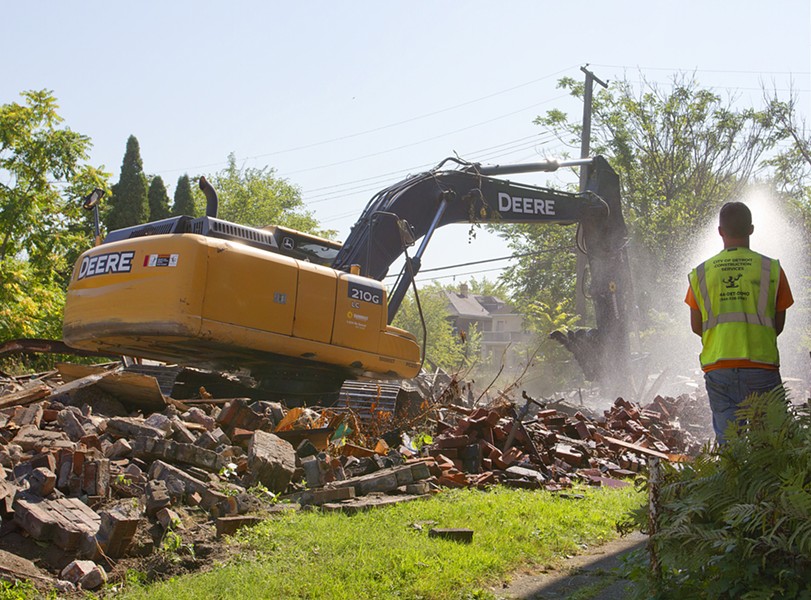 Mayor Mike Duggan is not giving up on his ambitious plan to demolish or renovate the thousands of vacant houses that are left in the city.

In November, the city council rejected the mayor’s $250 million bond proposal, which sought to eliminate the remaining blight in Detroit’s neighborhoods by demolishing roughly 19,000 vacant houses and renovating 8,000 abandoned homes. If approved, voters would have the final say in the form of a ballot initiative.

To get the bond on the November ballot, Duggan has to present a new plan that satisfies council members and voters.

“The mayor is committed to making sure that the city’s blight removal program reaches all neighborhoods,” mayoral spokesman John Roach tells Metro Times. “The bond program will allow for that under the full control of the city and full oversight of City Council.”

In September, Duggan declared the city had reached the “halfway point” toward eliminating residential blight after his administration demolished more than 19,000 vacant houses since he took office in 2014.

The $265 million in federal funds that financed the demolition blitz is running out.

To finance the final round of demolitions, Duggan proposed securing $250 million in unlimited tax general obligation bonds. To pay back the bonds, residents would have to forgo a planned drop in property taxes. But, Duggan emphasized, the tax bill would not increase over its current level.

“LaJuan is an exceptionally talented project manager and we will be looking to her to lead the effort to bring the demolition program fully under the direction of the city, and full oversight of City Council,” Duggan said in a news release. “We are fortunate to have someone of her deep experience and managerial ability already on our team to help us reset the demolition program and make the transition as smooth and effective as possible.”

Previously, the Building Authority and Land Bank handled demolitions. Those agencies had come under fire for their handling of the demolition program.

With a new demolition department and pledges to clean up the process, council members may get on board. Only time will tell.