Where in the hell is John James?

That’s a question on the minds of many journalists who have been unable to reach the Republican U.S. Senate candidate since he announced last year that he's running against incumbent Sen. Gary Peters.

In fact, Tuesday marked the 250th day that James has not spoken with a local Michigan TV station and 143 days without answering a question from a newspaper reporter in the state, according to the Michigan Democratic Party.

Metro Times has tried to reach James for several months, but his campaign failed to return each call. James has ducked questions about his meeting with indicted foreign agent Lev Parnas, Republican senators blocking witnesses in the impeachment trial, and President Donald Trump’s budget that would severely cut Medicare, Medicaid, and Social Security funding.

“John James started this campaign trying to hide his true positions from Michiganders — deleting his ‘2,000%’ support for Trump and calling the law protecting pre-existing conditions coverage a ‘monstrosity — and has since spent 250 days dodging Michigan TV to avoid answering any questions,” MDP spokesperson Elena Kuhn says in a news release. “The fact that James has made time for big out-of-state fundraisers with Mitch McConnell shows he isn’t putting Michigan first.”

While James has not made time to talk with reporters, he has found time for out-of-state fundraisers. In January, James' campaign said it raised $3.5 million in donations, compared to Peters' $2.5 million.

Instead of answering questions from reporters, James’ campaign is relying on social media and press releases to get out his message. Last week, his campaign sent out an email in which he complained about Democrats’ role in the “partisan impeachment charade.”

But voters are missing out on his positions on key issues. 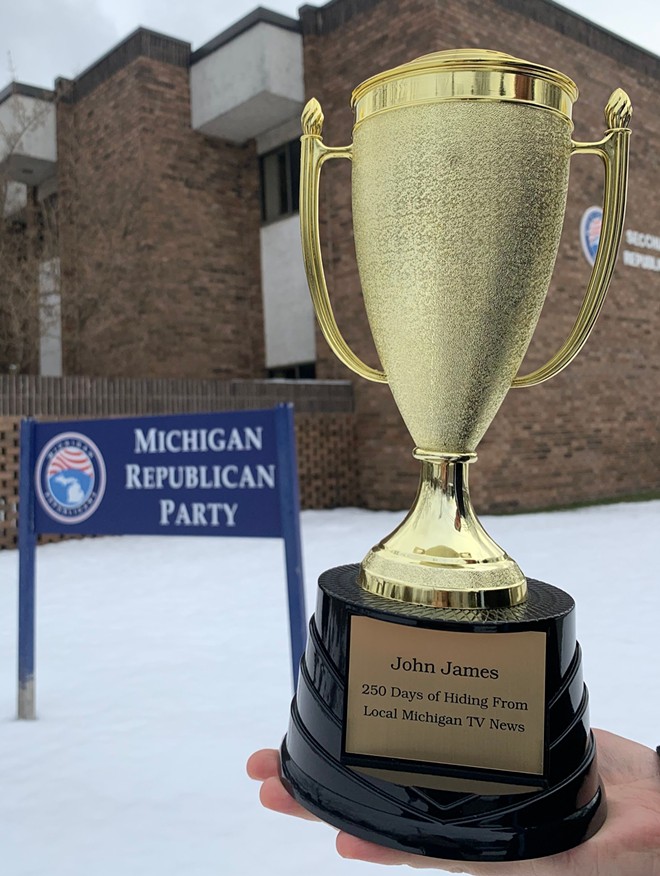