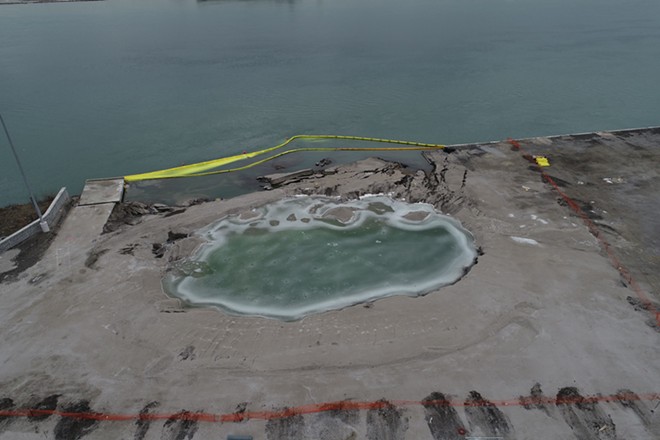 Detroit residents and environmental activists are urging the city to adopt a new ordinance aimed at protecting the Detroit River from unscrupulous polluters.

Councilwoman Raquel Castaneda-Lopez on Tuesday introduced the Detroit River Protection Ordinance, which would require the city to conduct regular inspections of companies operating along the river.

The ordinance is a response to a dock that collapsed and spilled contaminated soil into the Detroit River in November. The company responsible for the collapse, Detroit Bulk Storage, was stockpiling large mounds of gravel along the river without a permit to do so. City officials said they don't know the last time they had inspected the site.

Before the council meeting, residents and activists rallied outside of city hall, calling on city officials to take action on the ordinance.

“What became clear to me in writing this legislation is that we have glaring gaps in city law. We have one of the most industrial riverfronts in the country and there was not a section dedicated to protecting our water from these sorts of incidents,” Nick Leonard, executive director of the Great Lakes Environmental Law Center, said in a news release. “This ordinance will provide a strong foundation for making sure our waters are protected.”

The ordinance would increase oversight and accountability for businesses along the river by requiring businesses to maintain their properties, conduct environmental assessments of their land, and store material at least 150 feet from the shore. It also establishes penalties and enforcement actions and requires emergency management protocols in the event of contamination.

“Detroiters deserve immediate action that will protect our Great Lakes and drinking water. This ordinance does exactly that,” Justin Onwenu, environmental justice organizer for the Sierra Club, said in a news release. “We’ve done the research; we’ve engaged with stakeholders across the city and we’ve built consensus. This language is strong, well written, and ready to go. So we’ll be working to urge City of Detroit officials to make sure it is passed swiftly and unanimously.”

Castaneda-Lopez, whose district includes the contaminated property that collapsed, said the ordinance is an important step in protecting the environment and drinking water.

“I am excited to sponsor this legislation and am inspired by the passionate response to the dock collapse from community members who have recognized the need to act swiftly and decisively,” Castaneda-Lopez said in a news release. “It’s clear we have gaps in our laws and are currently failing to adequately protect our riverfront and drinking water. I’m committed to working with my colleagues to get this high-priority legislation passed.”

The ordinance also would improve the city’s response to future emergencies involving contamination.

“Nearly 4 million Michiganders depend on the Detroit River for drinking water, people need to be confident when they turn on the tap, they are not drinking poison — what have we learned from Flint?" Jamesa Johnson-Greer, policy specialist at Michigan Environmental Justice Coalition, said in the news release. “We truly got lucky with this incident but we don’t need to be lucky, we need to be prepared.”

The coalition has worked on the ordinance with Duggan’s administration, which has expressed its support.

Meanwhile, the companies responsible for the collapsed dock have been criticized by state officials for taking too long to clean up the site to avoid further contamination. The state’s Department of Environment, Great Lakes, and Energy (EGLE) has been closely monitoring the cleanup activity, said spokesman Nick Assendelft. EGLE is awaiting results from soil and water samples and has set a deadline for the companies to submit its final restoration plan for the site, Assendelft tells Metro Time.

Environmental activists are worried about the site.

"After the property owners ignored their commitments to build a new seawall, they operated without permits and the site collapsed. Now, there's a giant sinkhole that's still growing and has yet to be remediated," Simone Sagovac, project director for the Southwest Detroit Community Benefits Coalition, said in a news release. "This is a classic example of businesses not being good neighbors and not being held accountable. We need to change that for everyone's health and safety."

The coalition expressed optimism that the city will support the ordinance.

“As a Southwest Detroit Resident we deal with these incidents every other week it seems like. I’m hopeful that Mayor Duggan and all of City Council will support our efforts to pass this ordinance so that this never happens again,” Theresa Landrum, Southwest Detroit resident and environmental justice educator and activist, said in the news release.