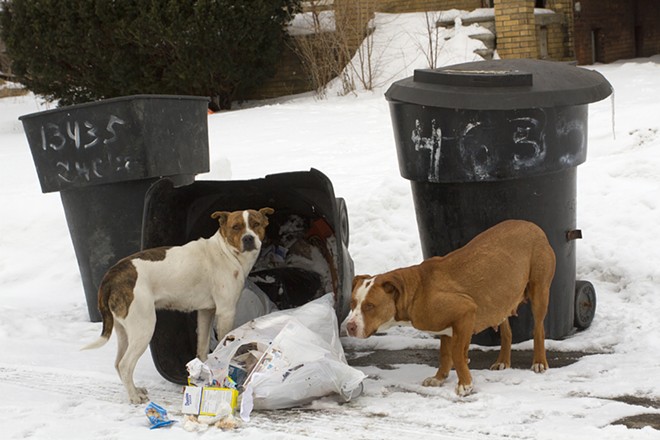 With a unanimous vote, the council amended the ordinance by adding a provision called “Emma’s Clause,” which requires the Detroit Animal Care and Control Division to investigate and evaluate all complaints about dangerous animals.

Under the provision, animal control officers also are required to visit the location of each complaint and take photographs and notes. The amendment comes six months after three dogs attacked Emma while she was riding her bike. Emma’s father had repeatedly complained about the dogs getting loose, but city officials never took action.

Council members criticized the city’s failure to enforce its dangerous animals ordinance, which empowers animal control officers to seize dogs that are neglected or not properly secured.

Dangerous and neglected dogs have been a serious problem in Detroit for years and were the subject of a Metro Times cover story in October. Detroit Animal Care and Control handles nearly 500 animal complaints a week, runs a shelter, and provides other services.

In December, Mayor Mike Duggan’s administration unveiled a new plan to handle dangerous and neglected dogs after years of slow response times and inadequate enforcement. The city pumped more money into Detroit Animal Care and Control to hire new employees and expand the city’s shelter. The city also has a new team of seven investigators, each of whom is responsible for a city district.

The city's enforcement efforts have increased. In 2019, animal control officers issued 740 tickets to pet owners for ordinance violations, a 300% increase over 2018.

“Our first priority is making sure animals do not pose a threat to human safety,” Director of Animal Care Mark Kumpf said in a news release. “Increasing our enforcement is helping to send a message to dog owners that they will be held accountable for their pets.”