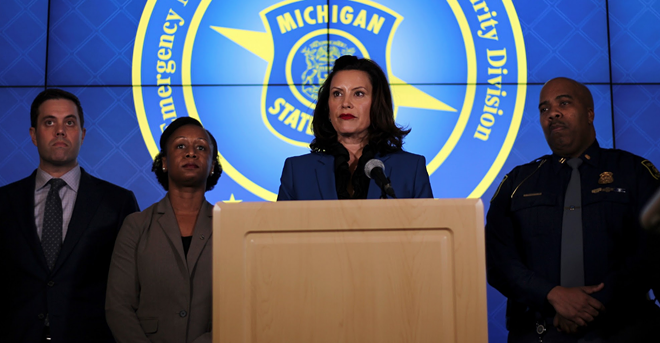 A day after calling for unity, President Donald Trump leveled unfounded criticism at Michigan Gov. Gretchen Whitmer for her handling of the quickly spreading coronavirus outbreak.

“Failing Michigan Governor must work harder and be much more proactive,” Trump tweeted at 9:30 a.m. Tuesday. “We are pushing her to get the job done. I stand with Michigan!”

Failing Michigan Governor must work harder and be much more proactive. We are pushing her to get the job done. I stand with Michigan!


By contrast, health officials have praised Whitmer for taking quicker actions than most states by being among the first to close schools, limit large gatherings, and order bars, restaurants, and other establishments to shut down.

The state’s only significant shortcoming — a lack of coronavirus testing kits and other medical supplies — is the fault of Trump’s administration, not Whitmer or Michigan.

The governor then listed the actions she's taken to combat the coronavirus.


Trump offered no explanation for his tweet, but the temperamental president appears to be angry that Whitmer pointed out Monday and Tuesday that the president’s administration is responsible for a lack of available testing kits, masks, hand sanitizer, and other supplies — a fact widely reported.

Whitmer said on CNN that the federal government “didn’t take (coronavirus) seriously enough on the front end,” a claim that is heavily backed up by facts.

“We need to expand our health care facilities that are going to get overrun because people are legitimately concerned about their health and they haven't had real leadership coming until we governors have stepped in,” Whitmer said on CNN.

The state acknowledged last week that it’s running out of tests because the federal government has been slow to provide the testing kits.

“We continue to request supplies on a daily basis from the federal government so we can test as quickly as possible,” Dr. Joneigh Khaldun, Michigan’s chief medical executive, said Sunday.

On Monday morning, Trump told a group of governors that the federal government does not have enough equipment to meet state demands, telling states to "try getting it yourselves."

As of Tuesday morning, the state reported 54 positive cases in 13 counties. Health officials, however, said there are likely many more positive cases, but the state doesn’t have enough tests for a majority of sick people.