In another troubling sign, the death toll doubled to 16.

Joneigh Khaldun, the state’s chief medical executive, warned Monday that “the number of cases could increase five-fold in the next week” if Michigan fails to take more drastic measures to slow the spread.

On Monday, Gov. Gretchen Whitmer announced a stay-at-home order that requires all non-essential businesses to close beginning at midnight on Tuesday in an attempt to curb the spread of the virus.

Most of the new cases are in Wayne County, which reported 161 new infections, with 86 of them in Detroit. In total, Wayne County has 638 cases and Detroit has 411.

Oakland County followed with 52 new cases, and Macomb with 35.

With a severe shortage of testing kits, health officials said there are likely many more cases that have yet to be diagnosed. Over the next few weeks, more testing kits are expected to become available. Last week, Henry Ford and Beaumont health systems began testing. University and private labs also are doing testing.

“Our health care system is going to get quickly overwhelmed,” Whitmer said. 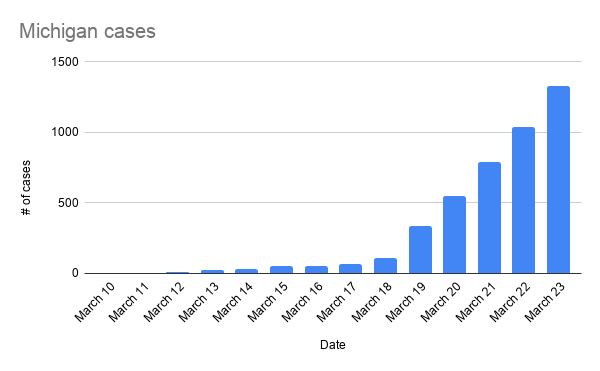