Coronavirus deaths rise to 92 in Michigan, with 3,657 positive cases The coronavirus outbreak is showing no sign of letting up in Michigan as health officials announced 801 new positive cases and 32 new deaths Friday.

Michigan’s death toll is now at 92, more than double what it was Wednesday. 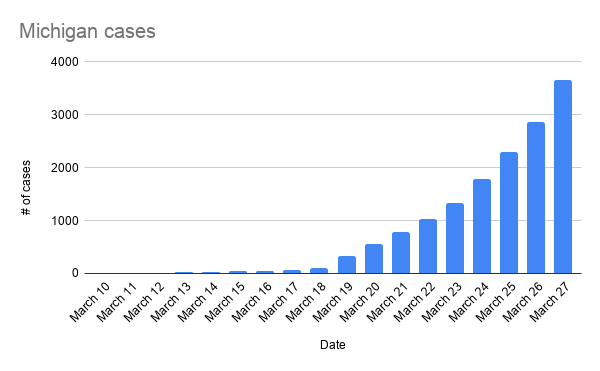 With a severe testing shortage, deaths are considered the strongest indicator for the direction of the outbreak. A week ago, Michigan had just four deaths.

Oakland County now has 824 positive cases and 26 deaths. In Macomb County, there are 404 confirmed infections and 14 deaths.

Sixty of Michigan’s 83 counties have at least one positive case.

“As the number of people tested and case counts have drastically increased in recent days, our team has prioritized how it is reporting this information,” Dr. Joneigh Khaldun, chief medical executive and chief deputy for health in Michigan, says in a news release. “Our goal is to provide timely and accurate data during this pandemic.”

The death rate is far higher for men, who make up 65% of the fatalities. Of the total positive cases, 51% are male.

Michigan’s testing capacity has drastically increased over the past week, with more than 1,500 tests now conducted in a day. Michigan tested nearly 14,000 people since the outbreak began. 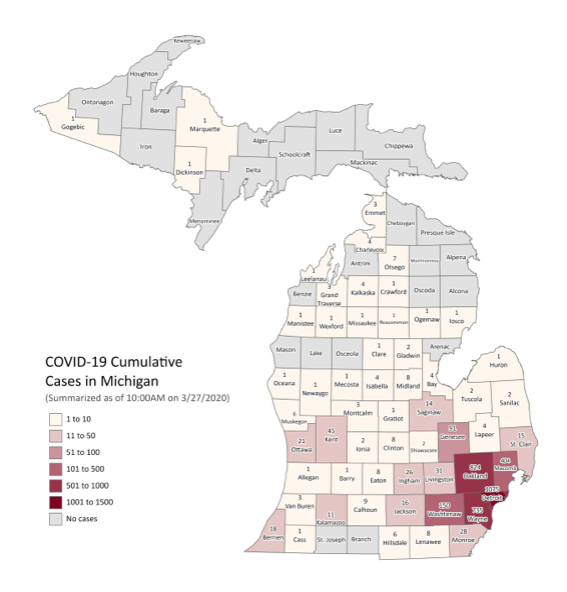