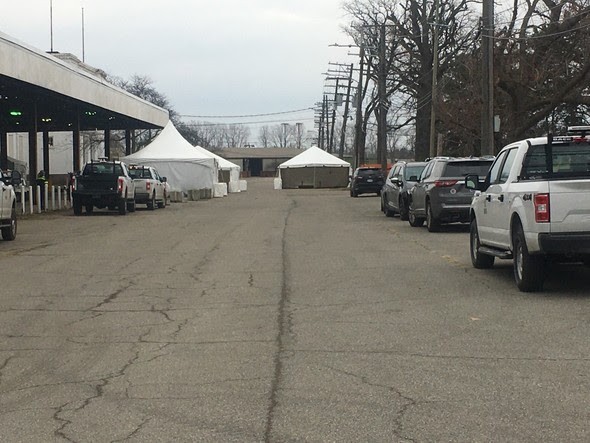 As Detroit is fast becoming a hotspot for the coronavirus in the U.S., the city has partnered with the tri-county region, health care systems, and Dan Gilbert to create a drive-through testing facility that will test 400 people a day.

At first, tests will be limited to 100 patients between 1-6 p.m. on Friday, and will be ramped up to 300 tests on Saturday and 400 tests a day on Monday, which will continue for at least six weeks, until May 8. The public entrance to the site is off of Woodward Avenue on W. State Fair Road.

Patients need to get a note from a doctor or primary care physician to get an appointment, which then must be made by calling 313-230-0505 between 9 a.m.-7 p.m., seven days a week. The drive-through testing site hours are 7 a.m.-6 p.m. Monday through Saturday.

The test results are received within five days.

At a press conference on Friday, Mayor Mike Duggan said the entire state is only capable of testing 1,500 people a day.

"We should be doing 5,000," Duggan said. "There are thousands of people who have coronavirus in the state. They just aren't being tested."

Duggan said he's worried Detroit will become the new epicenter for the coronavirus.

“We are preparing as if we get the kind of surge that New York had,” Duggan said. One-fifth of Detroit’s police force is under quarantine after 25 officers have tested positive for the virus.

On Monday, Gov. Gretchen Whiter issued an executive order calling on all residents to stay home as much as possible to curb the spread of the disease.

On Thursday, Michigan officials reported that 2,856 people have tested positive for the coronavirus, and 60 have died.

Officials say the State Fairgrounds site is the first of more expected to be set up in the tri-county area in the coming weeks. More information is available here.