Trump doesn't give a shit about Michigan, and he never did 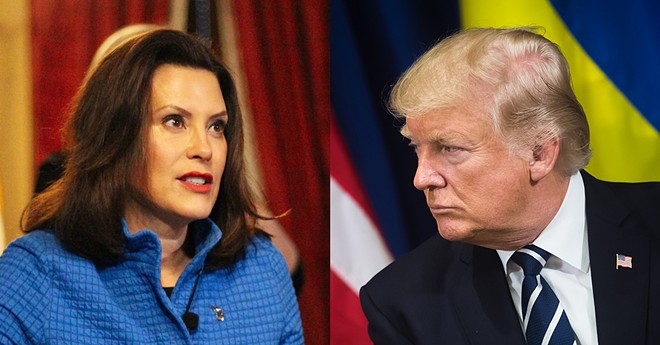 President Donald Trump, famously, won the presidency in a surprise upset thanks in part to Michigan, where he eked out a win by some 10,000 votes.

He seems to have forgotten that already.

In response to Gov. Gretchen Whitmer’s request for federal aid to help fight the coronavirus pandemic, Trump suggested he would withhold aid from the Great Lakes State — all because Whitmer dared to criticize him.

Trump blasted Whitmer on Fox News Thursday night, dismissing her as “the young, a woman governor from — you know who I'm talking about — from Michigan.”


“I don't know if she knows what's going on, but all she does is sit there and blame the federal government,” Trump said.

“Michigan is a very important state, I love the people of Michigan … but she is a new governor who has not been pleasant,” he said.

“We don't like to see the complaints," he added.

Whitmer fired back on Twitter shortly after the Fox News segment.

“Hi, my name is Gretchen Whitmer, and that governor is me,” she wrote. “I've asked repeatedly and respectfully for help. We need it. No more political attacks, just PPEs, ventilators, N95 masks, test kits. You said you stand with Michigan — prove it.”

Hi, my name is Gretchen Whitmer, and that governor is me 👋

I've asked repeatedly and respectfully for help. We need it. No more political attacks, just PPEs, ventilators, N95 masks, test kits. You said you stand with Michigan — prove it. https://t.co/FtWlTLZdqW


On Friday, Trump was even more blunt, saying he specifically instructed Vice President Mike Pence not to return calls to Whitmer and Washington State Gov. Jay Inslee, who had also been critical.

"I say, 'Mike, don't call the governor of Washington, you're wasting your time with him. Don't call the woman in Michigan," he said at a White House press briefing. "If they don't treat you right, I don't call."

Trump previously lashed out at Whitmer earlier this month. "Failing Michigan Governor must work harder and be much more proactive," he tweeted. "We are pushing her to get the job done. I stand with Michigan!"

Failing Michigan Governor must work harder and be much more proactive. We are pushing her to get the job done. I stand with Michigan!


Trump, who watches way too much fucking TV, seemed to be responding to Whitmer's appearance on CNN, where she criticized his administration for the lack of available testing kits, masks, hand sanitizer, and other supplies.

Whitmer said the Trump administration “didn’t take (coronavirus) seriously enough on the front end.” That’s no secret: Trump has repeatedly downplayed the threat of the virus.

This whole episode should be surprising to absolutely no one. After all, Trump was impeached for threatening to withhold federal aid to Ukraine if the country didn’t announce an investigation into his rival, Joe Biden. The request was for Trump’s political gain, not the country’s interests.

And remember, Trump made the request to Ukraine the very next day after Special Counsel Robert Mueller testified in a televised congressional hearing over the investigation into whether he colluded with Russia in interfering with the 2016 election. Mueller let Trump off the hook then.

After all this, Congress voted not to remove Trump from office for abuse of power. The only thing Trump has learned is that he can get away with this shit.

So much for quid pro quo. When it comes to Trump, that’s a one-way street.

Updated 10:35 a.m. on Saturday, March 28 with additional comments from Trump.