Michigan reported 52 new deaths from the coronavirus on Monday, the largest single-day increase, bringing the total number to 184.

The death toll doubled in just three days as public health officials warn that the peak of the outbreak is still weeks away.

In Detroit, the number of deaths rose from 35 to 52, with a total of more than 1,800 confirmed infections.

Detroit Police Chief James Craig and 69 of his employees have tested positive for coronavirus, with hundreds quarantined. Eight firefighters also have confirmed infections.

“He is very strong and very much in charge,” Duggan said at a news conference. “His body is fighting off this infection.”

In the week since Gov. Gretchen Whitmer imposed a stay-at-home order, Duggan said crimes have dropped 40% over the previous week.

“There is no doubt that the reduction in police runs is helping our situation,” the mayor said.

The city is dramatically increasing its testing capacity and is expected to receive 5,000 fast testing kits next week that produce results in 15 minutes, which Duggan called "a game changer.”

“This is what we’ve been waiting for,” the mayor said.

The city also administered more than 1,000 tests since it created a drive-through location at Michigan State Fairgrounds.

“We’re going to make testing available to every single person in this city who needs it,” Duggan said, an ambitious pledge in a state that has been unable to test most sick residents.

City officials said the increased testing capacity will cause a major spike in new confirmed cases.

"The number of COVID-19 cases is going to grow dramatically,” Denise Fair, chief public health officer of the Detroit Health Department, said at the news conference.

With a testing shortage, deaths are the most accurate indicator of the outbreak’s intensity. In one week, Michigan's death toll increased from 24 to 184. 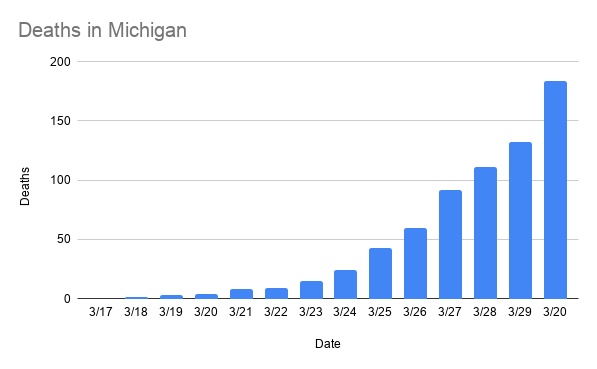 In Wayne County, there are now 82 deaths and nearly 3,200 confirmed infections.

In Oakland County, there are 1,365 positive cases and 48 deaths. Macomb County now has 728 confirmed infections and 27 deaths.

The death rate is far higher for men, who make up 68% of the fatalities but 50% of the positive cases.

The state is now testing more than 1,500 people a day. Globally, there were more than 770,500 coronavirus cases in 178 countries, and 36,946 deaths as of Monday afternoon, according to John Hopkins University & Medicine.