Detroit reported 15 new deaths from the coronavirus on Monday, the largest one-day jump since the outbreak was first reported in Michigan on March 10.

The city identified an additional 262 positive coronavirus cases, bringing its total to 1,804. The death toll rose to 50, a two-fold increase in four days.

The steep rise in new cases and deaths has alarmed public health officials, who are warning that Detroit has become a “hotspot” for the highly contagious disease. 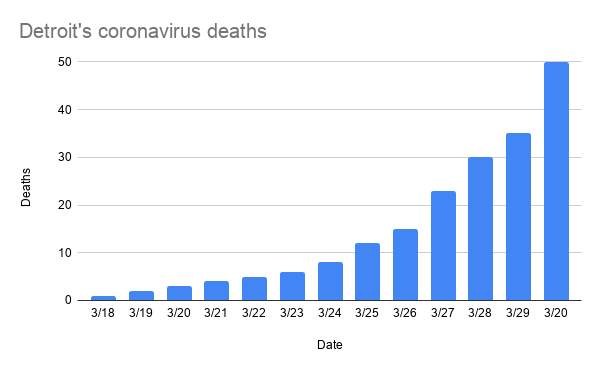 Making up 6.7% of Michigan's population, Detroit has 26.5% of the coronavirus deaths and 28% of the confirmed infections as of Sunday.

Officials aren’t sure why Detroit has been hit disproportionately hard, but they say the city’s population is vulnerable because of the high rates of poverty and chronic diseases.

“The system is overwhelmed,” Whitmer said Monday at a news conference.

As of Friday, Detroit Police Chief James Craig and 39 of his officers have tested positive for the coronavirus, and nearly a quarter of the police force has been quarantined.

Other well-known Detroit figures who have been infected include Detroit community leader Marlowe Stoudamire, who died, and long-time civil rights activist Rev. Horace Sheffield III, who is recovering.

Duggan plans to discuss the outbreak at a news conference at 3 p.m. Monday.