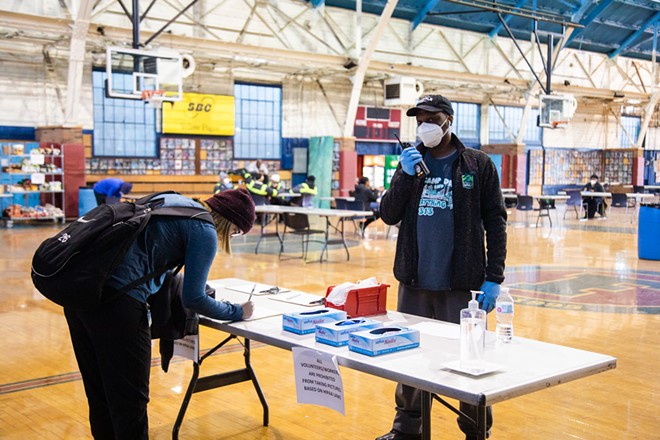 Detroit reported 19 new deaths from the coronavirus on Friday, bringing the total to 116.

The death toll doubled in the past four days.

The total number of confirmed infections in the city rose to 3,572, with 712 new cases, as the city dramatically increases its testing capacity.

With 6.7% of the state’s population, Detroit has about a quarter of all COVID-19 deaths and confirmed infections.

“This is going to be hard for weeks; it may be hard for months,” Mayor Mike Duggan said at at a press conference Thursday.

So far, 106 Detroit Police Department members, 24 firefighters and medics, and eight Detroit Department of Transportation (DDOT) employees have tested positive for COVID-19. Another 524 police officers, 126 firefighters, and 133 DDOT employees are under quarantine.

Beloved DDOT bus driver Jason Hargrove, police department chaplain Valerie Parks, and city inspector Jeremiah Brooks have died in the past few days from the coronavirus. The respiratory disease has also claimed the lives of the city’s homicide chief, Jonathan Parnell, and a 38-year old dispatcher whose name has not been released.

Duggan has made testing a priority in the city. On Thursday, the city became the first municipality in the U.S. to begin using testing kits that provide results within 15 minutes. They’ll be used on first responders, which will dramatically reduce the time that police officers and firefighters are under quarantine.

“This is a game-changer,” Duggan said of the 5,000 quick-testing kits from Illinois-based Abbot Laboratories. “We will be fighting the coronavirus for months. We need the tools to fight back.”

Duggan has also led an effort to establish a drive-through site at the former Michigan State Fairgrounds, where he expects at least 14,000 people to be tested for COVID-19 over the next six weeks. During the first two days, 43% of sick people who were tested came back positive for the coronavirus.

“It is critical that every single Detroiter have access to this,” Duggan said during a press conference Thursday.

The city will soon begin providing transportation to Detroiters who have a prescription to get tested but don't have cars.

Statewide, 417 people with coronavirus have died, and 10,791 have tested positive for COVID-19.