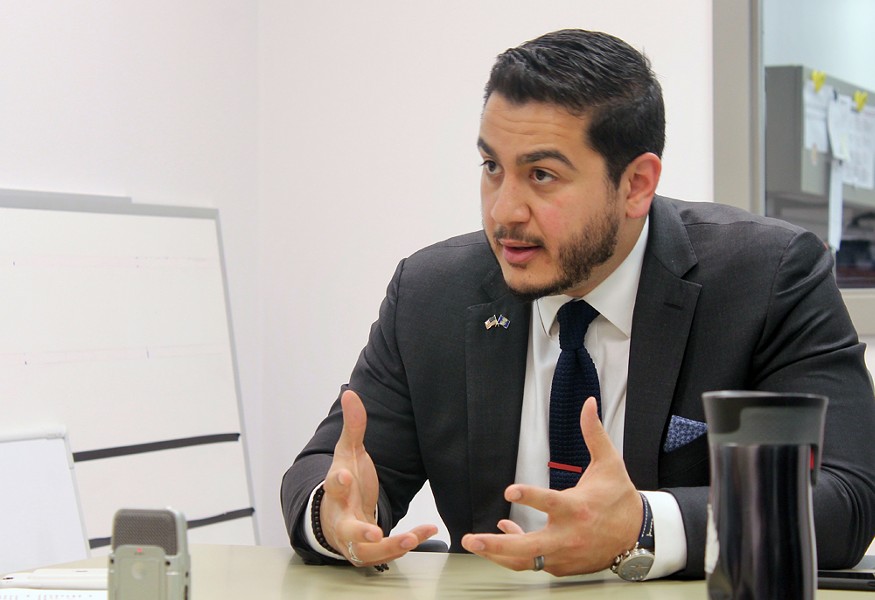 Detroit's former public health director Dr. Abdul El-Sayed weighed in on the debate around hydroxychloroquine, an antimalarial drug that has been touted as a potential cure for coronavirus patients by President Donald Trump in recent weeks. El-Sayed cautioned that despite the drug's promise, the science just isn't there to back it up yet.

"The President's promotion of #Hydroxycloroquine shows a failure to understand science," he tweeted Sunday evening. "In science we don't promote a treatment until there's solid, reproducible RCT [randomized controlled trial] evidence behind it. Without evidence, a treatment may be ineffective, even harmful."

The President’s promotion of #Hydroxycloroquine shows a failure to understand science.

In science we don’t promote a treatment until there’s solid, reproducible RCT evidence behind it. Without evidence, a treatment maybe ineffective, even harmful. #WhiteHouseBriefing pic.twitter.com/qvKxNyA6Pd

El-Sayed was referring to a Sunday White House press briefing in which Trump doubled down on his promotion of the drug. Without citing evidence, Trump said "there are signs that it works ... some very strong signs," and claimed it could also be used as a preventive measure.

Then, when a CNN reporter asked the National Institute of Allergy and Infectious Diseases director Dr. Anthony Fauci about the medical evidence for hydroxychloroquine, Trump interrupted, refusing to let Fauci answer.

"Do you know how many times he’s answered that question?" Trump cut in. "Maybe 15."

Trump even said he would take the drug himself.

In another interview on Sunday, Fauci cautioned of the drug’s ability to fight coronavirus: “the data are really just suggestive.”

Dr. Anthony Fauci is a respected scientist, he will always lead with the science. And the science shows that right now there's mixed evidence, and none of that is all that promising, particularly considering that the gold standard kind of test that you're looking for is a randomized control trial. And that evidence just hasn't panned out. On the other hand, you've got President Trump, who from the beginning, has been leading with a short term political perspective. And his short term political perspective is that he's looking for any ounce of hope, even if it's false hope that he can throw out there. And so I think, unfortunately, we're starting to see a little bit of a fissure where the President continues to want to go back and say, "Look, we've got this drug" — and he's not saying this, but he's hinting — "Look, there's a miracle cure. It's just around the corner." And Dr. Fauci is just saying, "Look, there's a process that we follow, by which we decide if and when there is a medication that is safe and effective in patients." Let's not give people false hope. Let's always lead with the science. And when we lead with the science, what we say will be true.


Hydroxychloroquine has become the center of a political storm in Michigan. In March, Gov. Gretchen Whitmer's administration issued a letter to doctors threatening "administrative action" if they prescribed the drug to coronavirus patients. Metro Times' comments section trolls accused the Democratic governor of opposing the drug simply to spite Trump and endangering lives, but Republican State Sen. Mike Shirkey later clarified that the prohibition was to prevent doctors from hoarding the drug and depriving it from non-coronavirus patients, who need it to treat lupus, rheumatoid arthritis, and other ailments.

At the news briefing, Trump also falsely said the Food and Drug Administration "gave it a rapid approval." In fact, the FDA issued a limited Emergency Use Authorization for hydroxychloroquine to be distributed from its stockpiles, but warned that it "is not FDA-approved for treatment of COVID-19," the disease caused by the coronavirus.

In a bit of a reversal, last week, officials announced that Detroit is now leading the nation's first large-scale test of the drug for coronavirus patients. At Henry Ford Health Systems, more than 3,000 volunteer frontline hospital workers are being asked to take the drug to see if it can be used as a preventive measure for COVID-19.

"I think that there is some great potential here amidst all of the sadness and hardship that we're going through right now," Whitmer said during a town hall last week. But as Whitmer's former gubernatorial rival El-Sayed cautioned, until the trial is over, we can't say for sure.

"'Is #Hydroxychloroquine a safe & effective #COVID19 treatment?' isn’t a *political* question — it's a SCIENTIFIC one," he tweeted. "The answer: WE JUST DON'T KNOW YET. ANY other answer is political spin — which has been the problem w/ the #COVID response all along. You can't spin science."

What Trump’s saying here is irresponsible: WE DON’T ACTUALLY KNOW that it’s not dangerous for folks w/ #COVID19.

Example: Aspirin is a safe drug—EXCEPT FOR IN KIDS W/ FEVERS, in whom it was used for a long time because we ASSUMED it was so safe.

It’s why we have to STUDY it. https://t.co/BLy1lEUYaf

“Is #Hydroxychloroquine a safe & effective #COVID19 treatment?” isn’t a *political* question—it’s a SCIENTIFIC one.

The answer: WE JUST DON’T KNOW YET.

ANY other answer is political spin—which has been the problem w/ the #COVID response all along.