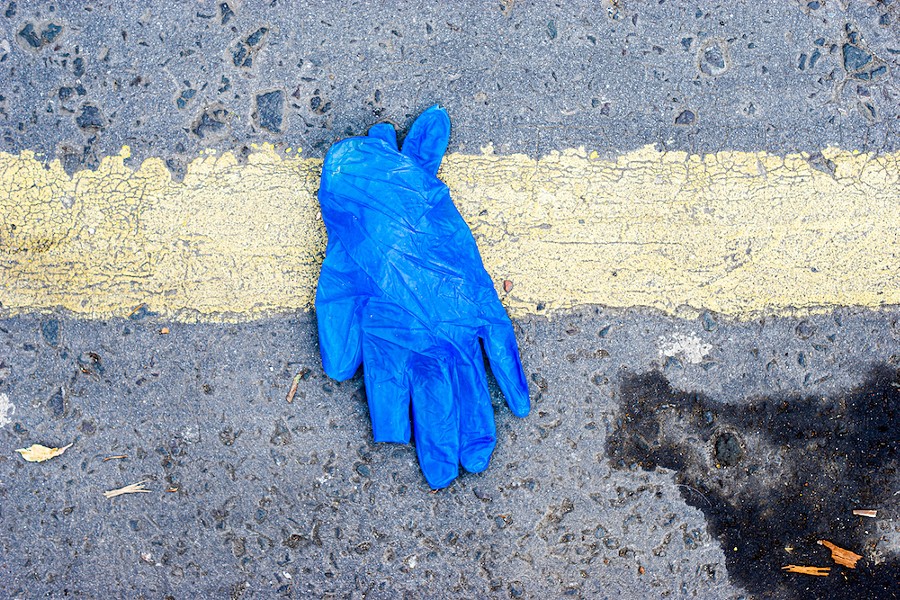 We get it, Michigan. You're scared of the coronavirus.

If and when you have to hit the grocery store or pharmacy, we imagine you suit up in your protective masks and gloves (though we were reminded this week that gloves don't really do shit unless you're constantly sanitizing). After you stock up on, you know, frozen pizza — which saw a 117.2% year-to-year increase during the first half of March — and whatever toilet paper your grubby little gloved hands can find, you exit the store and, instead of placing your personal protection gear in the trash as you would with literally any other garbage, you decide to leave it strewn outside your car door on the ground for some underpaid, overworked employee to dispose of because, as a result of this crisis, you've clearly lost control of your faculties.

Michigan State Police took to Twitter to remind folks that leaving PPE gear including disinfection wipes in parking lots, or, in some photographed cases, next to frigging trash cans, is still littering — and it puts those tasked with cleaning this shit up at risk. In other words, it's an environmental and health hazard all in one, you turds.

#Michiganders this is not the way to dispose of PPE. I found these and more in a parking lot at a local grocery store. Some by garbage cans. This is littering and someone else has to utilize gloves to clean these up. #Littering is a crime. #BeSafe & #Healthy. pic.twitter.com/3Bv79q2C4S


MSP Ft./LT. Mike Shaw shared with The Detroit Free Press that someone found littering these items could face up to a $225 fine, but it's up to courts to determine the cost of the fine and up to local police to issue the ticket.

Michigan's Natural Resources and Environmental Protection Act states that those who litter “less than 1 cubic in volume” could be slapped with a civil infraction with fines “of not more than $800” (which is $200 higher than the current Michigan weekly unemployment rate).

This, of course, is not exclusively a Michigan problem. Many states are facing an uptick in PPE littering. From New Jersey to California, people are throwing more than common sense to the wind, they're trashing parking lots, too.

Below is a helpful video on how to completely disrobe yourself of PPE garb via the Public Health England, because maybe hearing this shit with an English accent will inspire you to take this more seriously.