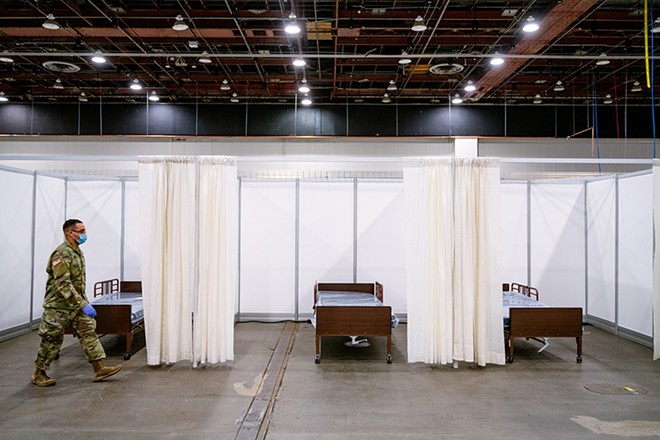 Late last month, images of make-shift morgues lined up behind Manhattan's Bellevue Hospital began to surface on social media. Similar scenes began taking place in Brooklyn, including a now-viral video of body bags being loaded into a refrigerated truck with a forklift. Most recently, more than 45 “mobile morgues” were deployed to NYC-area hospitals as the growing number of coronavirus deaths tax the city's funeral homes and morgues. One hospital even ran out of body bags.

As of Tuesday, New York City has reported 3,544 coronavirus deaths while Detroit, a growing hotspot for the virus that has yet to reach its apex, recently saw the death toll nearly double — reaching 221 on Tuesday, making the city's death rate higher than NYC's.

“We've seen a steady uptick in the number of bodies in the morgue and it's only a matter of time, as the number of deaths increase, the morgue will reach its limits,” Wayne County spokesman Bill Nowling told The Detroit Free Press.

Each of the refrigerated trucks can hold between 35-40 bodies each, whereas the county morgue has a 300-body capacity, which it's quickly reaching with 200 bodies currently stored. Nowling says they're anticipating a need for more trucks, as hospital morgues are also overwhelmed and may start transferring some to the county's facilities.

Unnamed sources working in Detroit's hospitals also told the Free Press that trucks have already arrived, and are already being used to store bodies.

Funeral directors are among those allowed to remove bodies from morgues. Without that ability, director of Wayne State University's mortuary science program Mark Evely said bodies would pile up, posing a huge health risk. When handling remains, Evely says they are taking extra precautions by wearing personal protective equipment and making sure only necessary staff come into contact with the body.

On Monday, New York City's mayor Bill de Blasio revealed that the city is considering issuing temporary burials should the city's morgues become overloaded. Though it hasn't been confirmed as to where the burial sites would be, the mayor dismissed rumors that the city would bury the dead in NYC's parks.