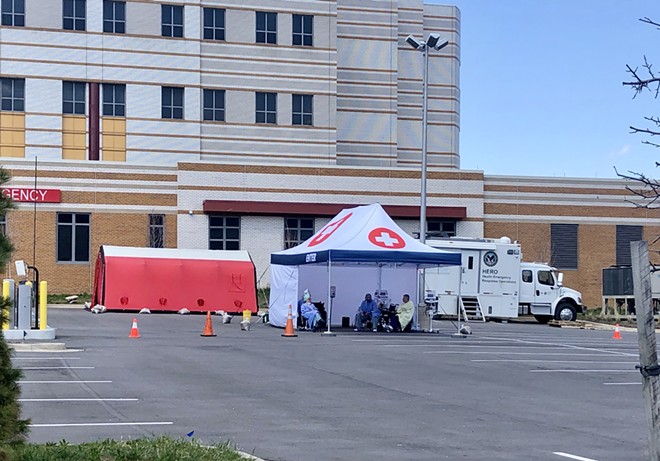 New deaths from the coronavirus in Michigan rose by more than 100 for the fourth day in a row, bringing the state’s total to 1,076.

The 117 new deaths on Thursday is the second-highest daily increase since the outbreak began last month.

Michigan ranks third in the number of deaths nationwide, behind New York and New Jersey.

The state has significantly increased its testing capacity. So far, more than 50,000 people have been tested in the state.

In Wayne County, where the coronavirus has hit the hardest, there were 58 new deaths for a total of 504. The county now has more than 10,000 positive cases, with 467 infections confirmed in the past 24 hours. Making up 18% of the state’s population, Wayne County has 46.8% of the deaths and 46.5% of the confirmed infections. Outside of New York City, Wayne County has the highest number of deaths in the U.S.

No city in Michigan has been hammered as hard as Detroit, which has a higher death rate than New York City, the epicenter of the outbreak. The city reported 25 new deaths, bringing its total to 272. Detroit also reported 6,083 confirmed cases, up 249 from Wednesday.

Statewide, 40% of the people who have died were Black, 31% white, and 24% unknown. Black people make up 33% of positive cases. Another third of the cases are unknown, and white people represent 25% of the confirmed infections.

Eleven of the state’s 83 counties have yet to confirm a COVID-19 case.

Outside of metro Detroit, Genesee County has the most deaths, at 48. The county’s deaths have doubled over the past four days.

Globally, there are 1.6 million coronavirus cases in 184 countries, and nearly 95,000 deaths as of Thursday afternoon, according to Johns Hopkins University & Medicine. The U.S. has more positive cases than any country in the world, with more than 450,000 confirmed infections and more than 16,200 deaths.