Michigan reported more than 200 new coronavirus deaths on Friday, the most the state has seen yet in a 24-hour period.

The 206 deaths brought the state’s total to 1,282, which is more than Illinois, Indiana, and Ohio combined. Only New Jersey and New York have higher death tolls. 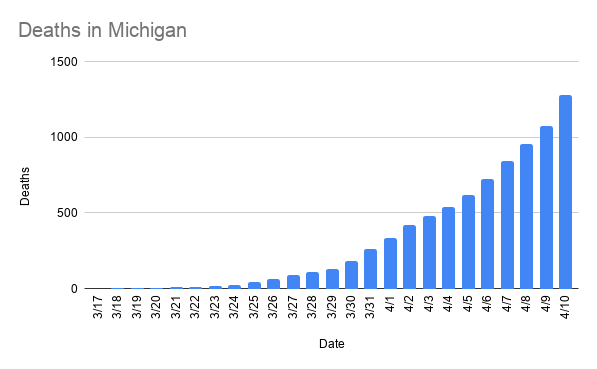 With a chronic testing shortage, public health officials say it’s far too early to accurately forecast the peak of the outbreak.

“If we continue with this trend and continue with the 100% mitigation strategies, then maybe we can see some bending in two weeks,” Dr. Teena Chopra, an infectious disease specialist at Wayne State University and Detroit Medical Center, tells Metro Times. “But it’s too early to assume anything.”

Gov. Gretchen Whitmer, who on Thursday extended her stay-at-home order until at least April 30, urged residents to adhere to social-distancing measures.

“If we’re going to beat this virus, we have to work together,” Whitmer tweeted Friday afternoon. “Stay inside. Call your loved ones and make sure they are too. Only leave the house for essential errands like groceries or prescriptions.”

While the state has dramatically increased its testing capacity, it’s still not enough, Chopra said, estimating the state needs “three to four times the testing kits” to adequately test vulnerable populations, especially those in nursing homes, jails, and other concentrated areas, where the disease can spread quickly.

To combat the spread, she said, it’s important to even test vulnerable populations who are not yet symptomatic, like officials have in countries like New Zealand and Iceland.

“These nursing home patients are coming to our hospitals, and the ones who are dying are dying quickly because physicians have very little time to save them because they are already in a severe state,” Chopra says.

Detroit reported 54 new deaths, bringing its total to 326, which is higher than Indiana, Ohio, or Wisconsin.

Detroit has more than 6,000 positive COVID-19 cases and will experience significant increases over the next few weeks because the city has vastly increased its testing capacity. More than 800 people a day are tested at a drive-through site at the Michigan State Fairgrounds, Duggan said. In nursing homes, where the infection rates "are really disturbing," the city is using tests that produce results within 15 minutes.

Infections have been reported in most of the 27 nursing homes in Detroit, Duggan said.

"We are bending the curve, but make no mistake, the infection rates and the deaths are still rising in Detroit," Fair said Friday.

In Wayne County, where the coronavirus has hit the hardest, there are 105 new deaths for a combined 609. The county has the highest number of deaths in the U.S. outside of New York City. The county has more than 10,000 positive cases, with 467 infections confirmed in the past 24 hours. Making up 18% of the state’s population, Wayne County has nearly half of the deaths.

Statewide, 41% of the people who have died were Black, 32% white, and 22% unknown. Black people make up 33% of the confirmed cases. Another third of the cases are unknown, and white people represent 26% of the positive cases.

On Thursday, Gov. Gretchen Whitmer created announced the creation of the Michigan Coronavirus Task Force on Racial Disparities, which will be responsible for gathering feedback from the most impacted communities and recommending ways to combat health care and economic disparities.

Only 11 of the state’s 83 counties have confirmed coronavirus cases.

Outside of metro Detroit, Genesee County has the most deaths, at 57. Kent is second with 13 deaths, followed by nine in Saginaw.

Globally, there are 1.7 million coronavirus cases in 185 countries, and more than 101,000 deaths as of Thursday afternoon, according to Johns Hopkins University & Medicine. The U.S. has more positive cases than any country in the world, with nearly 49,000 confirmed infections and more than 18,000 deaths.