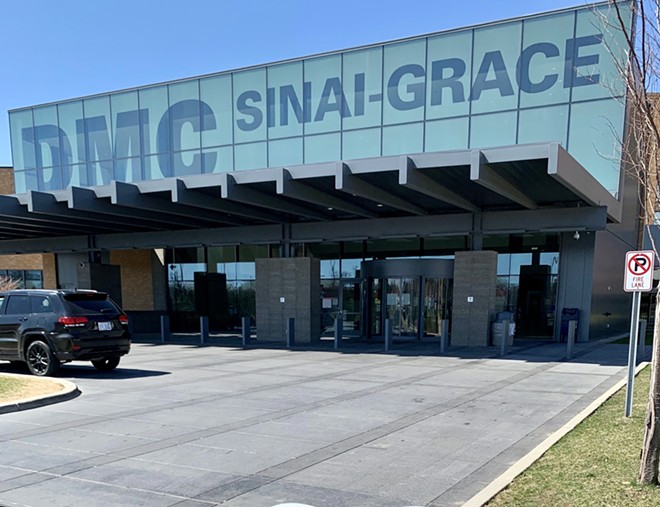 So many coronavirus patients are dying at Sinai-Grace Hospital that health care workers have run out of body bags and space at the morgue. Nurses have worked 24 straight hours without the proper protective gear. And without enough rooms, critically ill people on oxygen tanks are being placed in hallways.

That’s how nurses described the conditions at the Detroit hospital. Some were told to leave after staging a sit-in. Others are out of work with the coronavirus.

Kenisa Barkai, a Sinai-Grace nurse beloved by her coworkers, was fired on March 27 after imploring her supervisors to address what she described as a dangerous and severe staffing shortage. When they ignored her, Barkai said she threatened to alert state authorities. She even tried to form a union.

“It breaks my heart that it has come to this,” Barkai tells Metro Times, comparing the conditions to a “war zone.” “I have been a nurse for 11 years. We are in a critical need of nurses right now, and to fire me when I have experience and professionalism is wrong.”

She added, “My coworkers are in there battling not just for their patients’ lives but for their own lives. Just knowing I’m not there during this is heartbreaking.”

Sinai-Grace told Barkai that she was fired for posting a brief, benign video on social media that showed her gearing up with personal protective equipment. Barkai’s attorney Jim Rasor said the explanation for her termination was a "pretext" to cover up the real reason she was fired — she was blowing the whistle.

Rasor plans to file a whistleblower lawsuit against the hospital on behalf of Barkai.

“There was a complete lack of regard for patient care,” Rasor tells Metro Times. “Nurses have a professional obligation to comply with a set of ethical rules. So they have a duty to report this to management and state agencies.”

Sinai-Grace Hospital is part of the for-profit Detroit Medical Center (DMC), where officials have been reluctant to discuss the conditions or disclose how many coronavirus patients have been admitted into its hospitals and how many of its health care workers are sick. That’s in stark contrast to Beaumont and Henry Ford medical centers, which issue daily reports on the number of patients at their hospitals.

Barkai has organized a GoFundMe campaign to raise money to help nurses on the frontline.

Three other nurses spoke to Metro Times on condition of anonymity for fear of reprisal. At times, nurses have been required to take care of 12 patients at a time, they said. Nurses are caring for COVID-19 patients and non-coronavirus patients with the same protective gear, posing the risk of spreading the disease to those who don’t have it.

“People are dying left and right,” one nurse says. “There are freezer trucks out back holding dead bodies because the morgue is overfilled.”

The nurses said management doesn’t have a plan to address the staffing shortage.

“Upper management has been silent,” a nurse tells Metro Times. "There’s a reason Detroit Medical Center is the only hospital refusing to speak to the news. They are providing unsafe working conditions that are compromising both the safety of their patients and their staff.”

“We had six nurses, and they told us to leave because we just wanted a safe staffing ratio. We just needed extra help,” nurse Sal Hadwan said in a Facebook live video. “We cannot safely take care of your loved ones with six or seven nurses. It’s unacceptable.”

The coronavirus has hammered metro Detroit. More than 3,600 coronavirus patients have been hospitalized, and nearly 1,400 are on ventilators, state health officials said. Of those hospitalized, 89% are in southeast Michigan, which continues to see exponential increases in new cases and deaths.

Detroit has a higher death rate than New York City, the epicenter of the outbreak.

Statewide, 1,076 people have died from the coronavirus, and more than 21,000 people have tested positive for COVID-19.