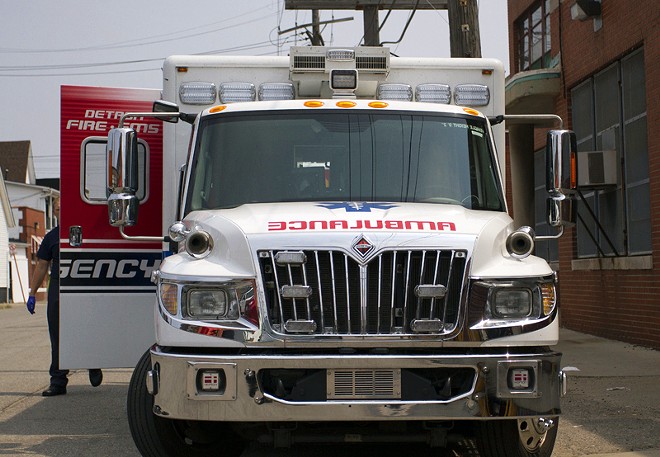 The number of coronavirus deaths in Michigan increased by 111 on Saturday, bringing the total to nearly 1,400.

That marks the sixth day of more than 100 daily deaths.

More than 3,600 people in Michigan have been hospitalized with COVID-19, according to the state’s Department of Health and Human Services (MDHHS). Of those, 1,582 are in critical care, and 1,441 are on ventilators.

Michigan continues to have the third-most coronavirus deaths among U.S. states, behind New York and New Jersey. Michigan has more deaths than Illinois, Indiana, and Ohio combined. 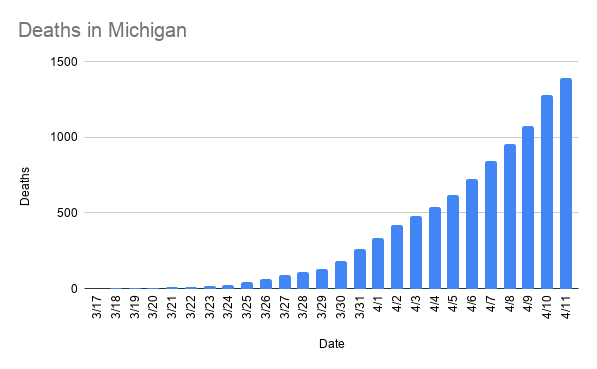 Since the outbreak began, at least 75,000 people have been tested. In the past week, the state averaged 4,700 new tests a day.

The coronavirus has taken root in jails throughout Michigan, where 364 state and 24 federal inmates have tested positive, according to the MDHHS. Eight inmates have died, up from five Friday.

All but nine of the state’s 83 counties have confirmed COVID-19 cases.

Wayne County, which has 18% of the state's population, has been hit the hardest, with nearly half of the deaths and cases in Michigan. Wayne County reported 43 new deaths, bringing its total to 652. The county now has nearly 11,000 confirmed cases, up 412 from Friday.

Detroit’s death toll was doubling every two days in March. Now it's doubling every six days, prompting Mayor Mike Duggan last week to express cautious optimism that the city “may be bending the curve.”

In Oakland County, 316 people have died from the coronavirus, up 34 from Friday. The state’s most affluent county also recorded nearly 300 new positive cases, bringing its total to 3,164 — the second highest in the state.

Macomb Country now has 209 deaths, up 12 from Friday. The county reported nearly 200 new infections, bringing its total to 3,164.

Outside of metro Detroit, Genesee County has the most deaths, at 62. Kent ranks second with 13 deaths, followed by nine in Saginaw.

Globally, there are 1.8 million coronavirus cases in 185 countries, and nearly 108,000 deaths as of Saturday afternoon, according to Johns Hopkins University & Medicine. The U.S. has more positive cases than any other country in the world, with more than 519,000 confirmed infections and 20,071 deaths.