State officials said on Monday that the worst of the coronavirus outbreak may soon be over, but cautioned that the number of cases and deaths will continue to be high.

“We are starting to see early signs of a plateau in the rate of COVID-19 cases here in the state of Michigan, particularly in southeast Michigan,” Dr. Joneigh Khaldun, the state’s chief medical officer, said at a news conference. “Despite the reductions in the rate of growth, there are still many new cases and deaths every single day.”

The state’s death toll rose to 1,602 on Monday, up 115 in the past day. The state averaged 123 deaths over the past eight days. But last month, the number of deaths doubled every two days. Now it’s taking nearly seven days to double. 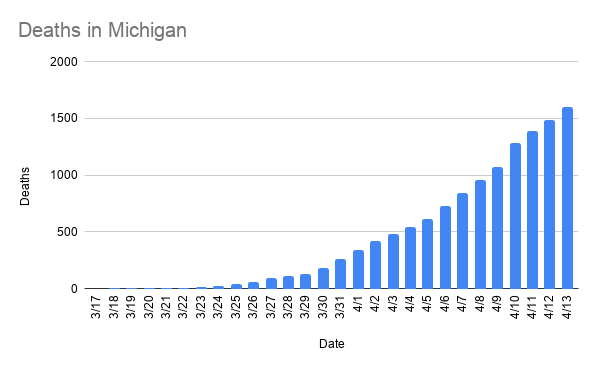 Despite the progress, Gov. Gretchen Whitmer emphasized that the state has a long way to go before she lifts her stay-at-home order, which is currently in effect through April.

“Easing up on social distancing measures too soon would be incredibly devastating,” Whitmer said at a news conference Monday. “A lot more people will die, and hospitals will become overwhelmed.”

Nearly 4,000 coronavirus patients are hospitalized in Michigan, according to the state’s Department of Health and Human Services (MDHHS). Of those, 1,570 are in critical care, and 1,365 are on ventilators.

Michigan has been hit hard by the coronavirus. The state has more deaths than Ohio, Illinois, and Indiana combined. Only New York and New Jersey have more deaths.

Michigan reported 371 new positive cases, bringing its total to nearly 7,000. But the actual number of infections is likely much higher because the state has a severe testing shortage.

Wayne County continues to get hit the hardest. With 18% of the state’s population, Wayne County has nearly half the deaths and confirmed infections. The county reported 56 new deaths, bringing its total to 760. Wayne County now has more than 11,600 positive cases, up 484 in the past day.


"When you look at the trend lines, we are making tremendous progress," Mayor Mike Duggan said at a news conference Monday. "So far, the city of Detroit saw one of the quickest spikes in the coronavirus in the country, and it appears so far we are doing an extremely effective job of knocking it back down."

Outside of metro Detroit, Genesee County has the most deaths, at 77. Kent and Saginaw follow with 13 deaths apiece.

Globally, there are 1.9 million coronavirus cases in 185 countries, and more than 118,000 deaths as of Monday afternoon, according to Johns Hopkins University & Medicine. The U.S. has more positive cases than any other country in the world, with more than 572,000 confirmed infections and 23,078 deaths.