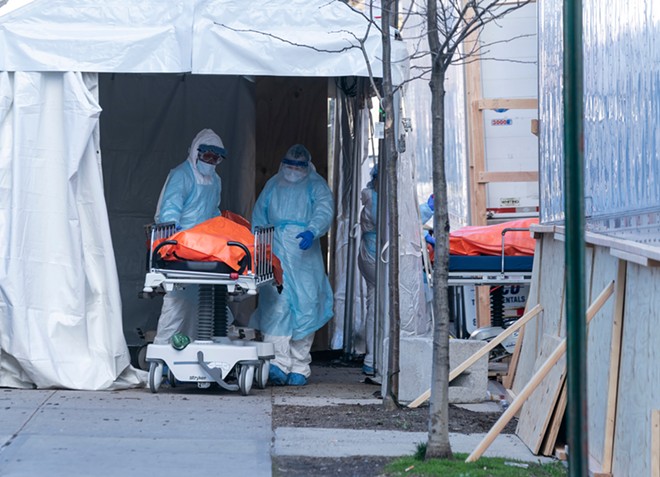 Oakland County has set up two mobile morgues as hospitals begin to run out of space to store bodies.

At least one hospital is already storing bodies in one of two refrigerated units behind the Oakland County Medical Examiner’s Office in Pontiac.

“We drafted a plan (to store bodies) hoping we never would have to use it,” Casimir Miarka, administrator of the county’s medical examiner’s office, tells Metro Times. “Obviously we’re using it now.”

If the situation worsens, the county may resort to storing bodies in an ice arena.

“We hope we don’t have to get to the point,” Miarka says.

Each refrigerated unit can store 20 to 24 bodies, Miarka says.

Hospitals are responsible for storing bodies in their own morgues, but the coronavirus outbreak is taxing their ability to accommodate the dead.

County officials said the situation underscores how serious the outbreak continues to be.

“There are still serious issues out here,” Miarka says. “Follow what your health officers are telling you to do to maintain social distance.”

Across Michigan, the coronavirus has claimed more than 1,700 lives and infected 27,000 people. Earlier this week, photos showing bodies piling up at Detroit's Sinai-Grace Hospital made national headlines.