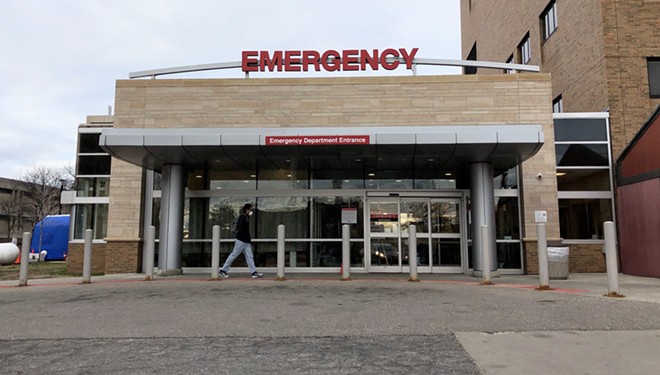 Nearly 70 of the deaths came in Detroit.

“COVID-19 is real. This is not a game,” Denise Fair, the city’s chief public health officer, said at a news conference Thursday. “COVID-19 doesn’t discriminate. It has impacted all of us across all spectrums. We need to take this seriously.”

Despite the sharp increases, health officials say there are positive signs that the worst of the coronavirus is almost over. The number of coronavirus-related hospital admissions is declining, and fewer patients are on a ventilator, according to the Michigan Department of Health and Human Services.

In another positive sign, Detroit Mayor Mike Duggan said the demand for testing at the Michigan State Fairgrounds is beginning to decline.

“It’s all trending in the right direction,” Duggan said at a press conference on Thursday.

Detroit Police Chief James Craig, who has recovered from the coronavirus, made his first public appearance since he tested positive for COVID-19.

“This unknown enemy that we fight is real, and it affects us all in different ways,” Craig said at the news conference. “If I could leave our viewers with one thing: Fight. Fight. You fight to survive.”

More than half of the state’s new deaths came in Wayne County. With 95 new casualties, the county’s death toll rose to 981, which is more than Ohio, Indiana, and Wisconsin combined. Wayne County also reported 458 new confirmed infections, bringing its total to more than 13,000.

Positive cases have been identified in all but six of the state’s 83 counties.

Outside of metro Detroit, Genesee County has the most deaths, at 99.

The death rate is higher for men, who make up 57% of the fatalities but 45% of the positive cases.

Globally, there are 2.1 million coronavirus cases in 185 countries, and more than 141,000 deaths as of Thursday afternoon, according to Johns Hopkins University & Medicine. The U.S. has more positive cases than any other country in the world, with more than 650,000 confirmed infections and nearly 31,000 deaths.