Although the numbers remain high, they appear to be flattening out. Hospitals admission rates are declining, and fewer people are on ventilators.

At a press conference Friday, Gov. Gretchen Whitmer said the trends are promising, but it’s far too early to estimate when she will begin easing the stay-at-home order.

"We’re still seeing more than a thousand new cases every day and 100 new deaths every day," Whitmer said. "The rate of infection remains high. The threat of a second spike that overloads our hospitals is still very real if we don’t get this right."

Earlier in the day, Whitmer was more upbeat on Good Morning America, saying the state may start “relaxing” social-distancing measures in early May. But her tone was far more cautious at the press conference, saying the state still doesn’t have enough testing kits for every sick person.

“We have to know how much COVID-19 is present in the state,” Whitmer said. “The last thing I want to have is a second wave, so we have to be very smart.”

The numbers remain grim in Detroit, where the death toll rose to 572, up 34 casualties from the day before. The city now has 7,400 confirmed cases.

The coronavirus has swept through all 27 of the city’s nursing homes, killing at least 98 residents and infecting hundreds of others, Mayor Mike Duggan said at a press conference Friday.

“Our battle is turning almost entirely on the nursing homes,” Duggan said.

Last week, the city launched an aggressive plan to test every nursing home resident and employee in Detroit, even if they aren’t symptomatic. The tests produce results in 15 minutes, so nursing homes can isolate residents who are infected.

Nearly half the state’s cases and deaths are in Wayne County, where the number of fatalities rose to 1,044 on Friday, up 63 in the past day. The county now has 13,223 confirmed infections. 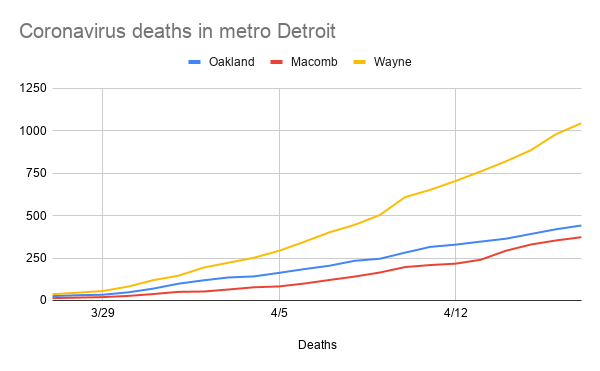 Outside of metro Detroit, the coronavirus is sweeping through Genesee County, which reported 106 total deaths and 1,197 confirmed cases.

The death rate is higher for men, who make up 56% of the fatalities but 45% of the positive cases.

Globally, there are 2.2 million coronavirus cases in 185 countries, and more than 148,000 deaths as of Friday afternoon, according to Johns Hopkins University & Medicine. The U.S. has more positive cases than any other country in the world, with more than nearly 687,000 confirmed infections and more than 32,000 deaths.