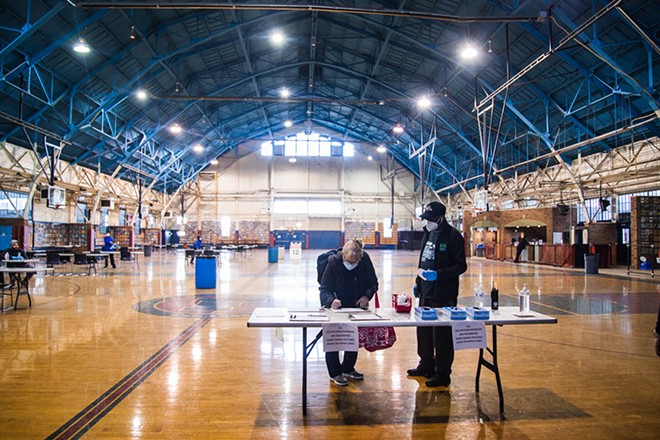 For Michigan to safely reopen the economy, Gov. Gretchen Whitmer says the state needs to “double or triple” the number of coronavirus tests it conducts every day.

The state averaged 4,500 daily diagnostic tests a day over the past month. The Harvard Global Health Institute estimates that states need a daily minimum of 152 tests per 100,000 people. For Michigan, that’s 15,200 daily tests.

“We could, if we had all the supplies we needed, do 11,300 tests a day working with our current capacity,” Whitmer said at a news conference Monday. “The reality is, we’re about half of that.”

Michigan, like many other states, is facing a severe shortage of swabs and reagents. To reopen the economy, governors and public health experts say states need an abundant supply of tests to determine how much of the population has been infected. Widespread testing also is essential to spot small outbreaks before they become too big.

Governors have been urging President Donald Trump to help obtain testing supplies. But Trump continues to insist states have enough tests to reopen the economy.

“It’s not accurate to say there’s plenty of testing out there and the governors should just get it done,” Hogan said Sunday on CNN. “That’s just not being straightforward.”

President Trump’s claim that states have enough tests to reopen “is just absolutely false,” says Maryland Gov. Larry Hogan. “It’s not accurate to say there’s plenty of testing out there and the governors should just get it done. That’s just not being straightforward.” #CNNSOTU pic.twitter.com/0K48hRAgzI

“You’ll have so many swabs you won’t know what to do with them,” Trump said.

Until this week, Michigan was only testing people with symptoms. To get an accurate gauge of how widespread the coronavirus is, experts say asymptomatic people also need to get tested. According to the Centers for Disease Control and Prevention, as many as a quarter of COVID-19 patients are asymptomatic.

Beginning this week, Michigan began offering a few hundred daily tests to essential employees who aren’t showing symptoms. But that is nowhere near enough to reopen the economy.

“We have capabilities that we can’t meet because we are losing those critical things from the supply chain,” Dr. Joneigh Khaldun, the state’s chief medical officer, said Monday, referring to the shortage of swabs and reagents. “We’ve got a lot of work to do.”

Whitmer said states are competing with each other to buy testing kits.

“Those supplies are in demand globally, and we are competing to get them and are working incredibly hard so we can ramp up to that 11,3000 capacity and hopefully beyond,” Whitmer said Monday.

On Tuesday, Mayor Mike Duggan expressed frustration with the limited supply of tests, saying the city likely won’t see a meaningful decline in deaths until there are enough tests for asymptomatic people.

“We went up really fast, then we started coming down, and now we are at a flat level,” Duggan said. “It’s going to be harder to knock it down.”

"As a community, we are really going to have to ramp up testing across multiple venues to really get a handle on this," Kalkanis said in a press call last week. "We’re exploring in all fronts ways to double, triple, quadruple these numbers so that everyone in the community can rapidly get a test."

Whitmer is expected to extend her stay-at-home order, which expires at the end of the month, until the state has a more abundant supply of tests.

Michigan ranks as the third hardest-hit state in the nation by the coronavirus, with 2,700 deaths and nearly 33,000 positive cases.

Related Why did Michigan get hit by the coronavirus harder than its neighbors?

Why did Michigan get hit by the coronavirus harder than its neighbors?
By Steve Neavling
Local News
Stay on top of Detroit news and views. Sign up for our weekly issue newsletter delivered each Wednesday.