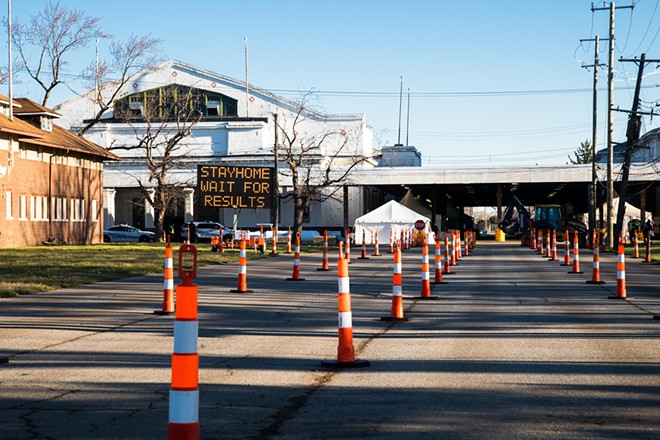 Nearly 3,000 people with the coronavirus have now died in Michigan, a figure that has been increasing by more than 100 a day.

The state reported 164 new deaths on Thursday, bringing its total to 2,977.

Although the numbers remain high, the state is beginning to show signs of controlling the virus: The hospitalization rates are declining, and the number of new deaths is flattening out.

But before Michigan can begin reopening the economy, Whitmer and health experts say the state needs to see a steeper decline in hospital admissions and a three-fold increase in its testing capacity.

About 47% of the new deaths were reported in Wayne County, which now has nearly 1,400 casualties and 15,000 positive cases.

Detroit reported 53 new deaths on Thursday, one of its largest one-day increases since the outbreak began, bringing the city’s total to 786. More than 130 of those deaths were nursing home residents.

The coronavirus, which hit southeast Michigan the hardest, continues to spread throughout the state, with 19 additional counties reporting more than 100 cases. Genesee County has the most outside of metro Detroit, with 1,387 cases and 144 deaths.

Over the past 12 days, the number of inmates who tested positive in Michigan-run jails have more than doubled, from 335 to 759. During the same period, the number of deaths increased from five to 28.

The youngest person to die was 5 years old, and the oldest was 107, with an average age of death at 74.2 years old.

The death rate is higher for men, who make up 55% of the fatalities but 45% of the positive cases.

Globally, there are 2.7 million coronavirus cases in 185 countries, and more than 187,000 deaths as of Thursday afternoon, according to Johns Hopkins University & Medicine. The U.S. has more positive cases than any other country in the world, with more than 850,000 confirmed infections and 47,000 deaths.