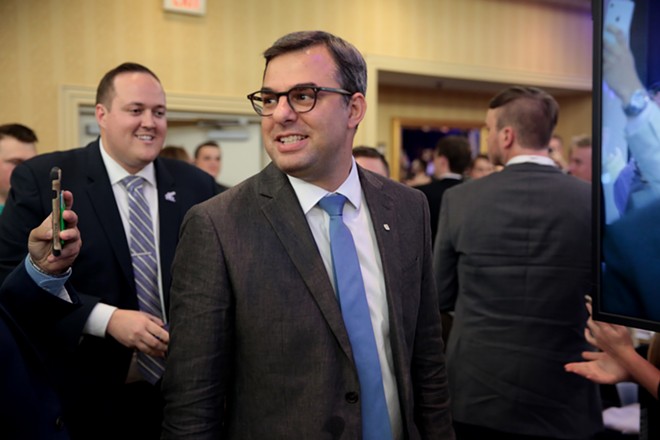 Self-described "lowercase 'L'" libertarian Justin Amash is looking to become an uppercase "L" Libertarian. The Grand Rapids-based U.S. Representative announced on Tuesday that he has launched an exploratory committee to seek the Libertarian Party's nomination for president.

"We're ready for a presidency that will restore respect for our Constitution and bring people together," Amash tweeted. "I'm excited and honored to be taking these first steps toward serving Americans of every background as president."


He also appeared to make a Super Smash Bros. reference.


Amash left the GOP last year after becoming the first Republican Congressman to call for Trump's impeachment. He dramatically announced his departure from the party in a Fourth of July op-ed in The Washington Post, in which he lamented the two major parties had devolved into a "partisan death spiral." At the time, Amash said he was an independent.

When he previously teased a potential third-party campaign for president, Amash said he wouldn't do it to merely play a spoiler to Trump.

"When I run for something, I run to win," he told The Hill.

Amash faces stiff re-election for his seat in the House, facing both Republican and Democratic challengers. The deep-pocketed DeVos family has also turned its backs on Amash.

In Michigan, the Libertarian Party enjoyed a boost in 2016 when former New Mexico Governor Gary Johnson earned 172,136 votes for his presidential bid. That surge enabled Michigan's Libertarian Party to hold a primary in 2018 — the first time a third party had qualified to do so in almost 50 years. Bill Gelineau emerged as the party's 2018 gubernatorial nomination, but earned just 56,606 votes, or 1.3 percent of the vote.