Deaths from the coronavirus topped 1,000 in Detroit on Wednesday, a grim milestone for the nation's most impoverished big city.

The city reported 20 new deaths Wednesday, bringing its total to 1,008.

"It's a total that is unimaginable," Mayor Mike Duggan said at a news conference on Wednesday. "We're pretty comparable to New York in the number of residents we have lost."

With 149 deaths per 100,000 residents, Detroit now has more deaths per capita than New York City, the epicenter of the coronavirus in the U.S. 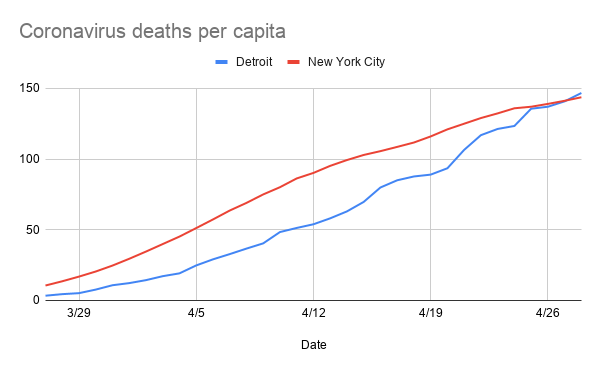 Of the total deaths, 218 were nursing home residents and staff.

Duggan estimates that 10% of Detroit residents have the coronavirus. But with a critical shortage of tests, the city has only confirmed 8,954 cases, which is just 1.3% of the population.

"We're going to ramp up our testing so every resident who wants one can get one," Duggan said.

Despite the challenges, the city is showing signs of controlling the spread: The number of new deaths is declining, and fewer coronavirus patients are being hospitalized.

Long before the coronavirus swept across America, underserved Black communities have been struggling with a severe health crisis. Generations of racist housing and economic practices have trapped many Black people in impoverished neighborhoods without adequate resources. In Detroit, where more than a third of its population is impoverished and many are uninsured or underinsured, residents are far more likely to have pre-existing health conditions like diabetes, asthma, high blood pressure, heart disease, and obesity. Asthma-related hospitalizations, for example, are three times higher in Detroit than the rest of the state.

"So many of our families are experiencing heartbreaking loss as a result of this virus," Denise Fair, Detroit's chief public health officer. "We're going to be in this for a long time. This is the new normal."