Nearly half of the inmates tested in Michigan prisons have coronavirus

The coronavirus is rapidly spreading inside Michigan prisons as officials struggle to contain the outbreak.

The number of positive cases in state-run prisons has more than quadrupled since April 12, from 335 to 1,412. During the same period, coronavirus deaths have increased eight-fold, from eight to 41.

The crisis is likely far worse than testing indicates because only 8.2% of the state’s 38,000 inmates have been tested, despite the high risk of transmitting the virus. Of the 3,117 inmates who have been tested, 45.3% have come back positive.

Jails and prisons are fertile environments for the spread of COVID-19 because inmates and corrections officers are confined to a small space. Inmates also are disproportionately vulnerable to severe reactions to COVID-19 because of the high rate of chronic disease.

Alleging the state is mishandling the outbreak in prisons, inmates in several Michigan jails filed a class-action lawsuit Wednesday in U.S. District Court for the Eastern District of Michigan. The lawsuit accuses the Michigan Department of Corrections (MDOC) of violating inmates’ Eighth Amendment rights, which prohibits cruel and unusual punishment.

The lawsuit is calling on the state to test every inmate to curtail the spread.

"Prisons provide an ideal environment for an infectious disease to spread,” the lawsuit states. “They are designed to keep large numbers of people in relatively small spaces with very little personal space or privacy. Prisons are often filled to prescribed limits, if not over the limits. Thus, the possibility of social distancing is extremely limited.”

According to the lawsuit, inmates are often double-bunked in a cell or confined to units with multiple people, telephones and kiosks are not disinfected between each use, and soap is rationed because many inmates can't afford to buy it.

“When you put people in prison, you take away their ability to take care of themselves,” Kevin Ernst, one of the attorneys who represents the plaintiffs, says in a news release. “If you take away that ability, you have to provide care for them. Prisoners are not able to buy masks, soap, or isolate themselves. The state took that ability away from them and is now forcing them to be around COVID-positive inmates. The state has a duty to do something to protect them.”

Corrections officers also are getting infected. More than 245 prison staff members have tested positive, and two have died, according to MDOC records.

"An outbreak at any one prison could easily spread to the surrounding communities through prison and medical staff. Time is running out for proper protections to be put into place," the lawsuit states.

Public health officials recommend testing every person in congregate settings such as prisons so the infected people are identified and isolated. Up until last week, the state had only been testing inmates who had symptoms, even though up to a quarter of the people infected with COVID-19 are asymptomatic, according to the Centers for Disease Control and Prevention.


“It is impossible for anyone who is incarcerated to practice what public health officials say is essential to slow the spread of the virus,” Hannah Fielstra, one of the attorneys who filed the lawsuit, says in a news release. “Keeping prisoners confined to these prisons with unsanitary practices and where conditions inherently create an atmosphere in which the virus can rapidly spread is a potential death sentence feared by those currently incarcerated.”

The worst of the outbreaks occurred at Lakeland Correctional Facility in Coldwater, where about half of the roughly 1,400 inmates are elderly or have chronic health issues.

Beginning last week, the state began testing every inmate at the prison.

“We were very concerned about the prisoners there and their health and safety,” MDOC spokesman Chris Gautz tells Metro Times.

What officials discovered was startling: More than half of the inmates tested positive for COVID-19, and 14 have died. 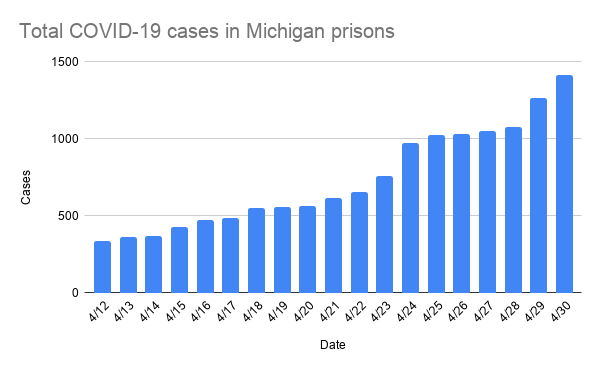 “The vast majority of these cases were asymptomatic, which is scary because you have a bunch of people walking around and unknowingly spreading it,” Gautz says. “It’s really important to know where the problems are so you can fix them.”

Beginning this week, the state began testing every inmate at G. Robert Cotton Correctional Facility near Jackson. So far, 140 of the 792 inmates who have been tested have confirmed infections. To date, no deaths have been reported.

Prisoner Craig Seegmiller, one of the lawsuit’s plaintiffs, is confined to a 10-by-12-foot unit with seven other men at G. Robert Cotton Correctional Facility. Five of his cellmates have tested positive for COVID-19, and he has not been tested, according to the suit.

"He constantly lives in fear that he will die because of the lack of treatment and testing provided to inmates even after they have been exposed to inmates with known infections," the lawsuit states.

At Parnall Correctional Facility in Jackson, 170 of the 211 inmates who have been tested have confirmed infections. Nine prisoners have died from COVID-19.

Women’s Huron Valley Correctional Facility in Ypsilanti reported 79 confirmed infections among the 126 who have been tested. Three have died.

At Macomb Correctional Facility in Lenox Township, 93 of the 114 inmates who have been tested have confirmed infections. Five inmates have died.

Gov. Gretchen Whitmer has declined to commute sentences, but said parole boards are working seven days a week to decide whether to release inmates who have served at least their minimum sentence.

“We have been doing robust testing and isolation,” Whitmer said at a news conference this week. “We want to keep people safe. The upgraded testing and ability to isolate and lower the population has helped us do that.”

Parole boards average about 130 hearing a week. They are now averaging 200 to 220, Gautz says.

“The Parole Board is doing everything in its power to release prisoners who are eligible,” Gautz says, adding that “public safety always comes first.”

Victoria Burton-Harris, a defense attorney who is running for Wayne County prosecutor, says inmates are facing risks that far exceed their crimes.

“It is not acceptable for a jail sentence to become a death sentence,” Burton-Harris says. “Everyone has value. Everyone is worth saving. Everybody has a story. We are not the worst things we’ve ever done, and we certainly don’t deserve to die.”