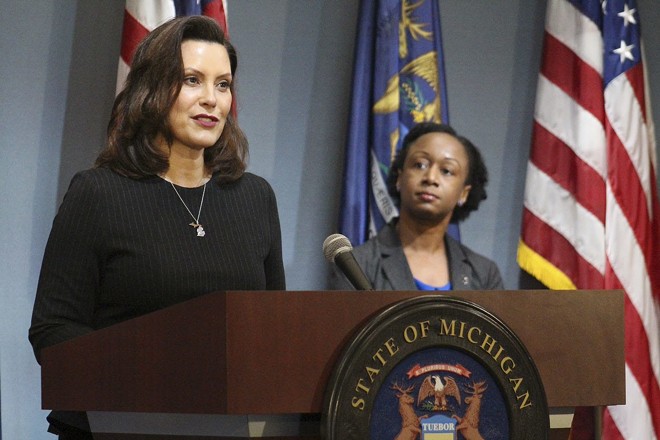 Michigan reported 77 new coronavirus deaths on Friday, one of the lowest one-day increases in a month, as the number of people hospitalized for COVID-19 declined for the 15th straight day.

The state's death toll reached 3,866 on the 39th day of the state’s stay-at-home order. Michigan has the third-highest number of deaths in the U.S., behind New York and New Jersey.

In April, the state averaged 116 new deaths and 1,068 confirmed infections a day.

A day after hundreds of protesters rallied against Michigan’s stay-at-home order at the State Capitol on Thursday — some armed with rifles — Whitmer said she sympathized with people’s frustrations.

“I know that some people are angry, and I know many are feeling restless,” Whitmer said at a news conference on Friday. “I know that people are itching to get back to work, and I get it. I respect it, and it’s OK to feel that way. There’s nothing that I want more than to flip the switch and return to normal. But that’s not how it’s going to work, unfortunately.”

She condemned those who waved Confederate flags and threatened violence, however, and called for unity.

"Swastikas and Confederate flags, nooses and automatic rifles do not represent who we are as Michiganders," she said. "This state has a rich history of coming together in times of crisis. Our brave soldiers fought to keep the Union intact during the Civil War. We came together as the Arsenal of Democracy to defeat the Nazis because we were united against a common enemy. Now we must channel that same energy against our common enemy, which is COVID-19."

Whitmer said the state is making progress, but the numbers of new deaths and cases are too high to reopen much of the economy. She also expressed concerns about the rising number of cases in western Michigan.

“It will not be business as usual in Michigan for some time,” Whitmer said. “It’s going to be one step at a time.”

Detroit, the epicenter of the coronavirus, reported just nine new deaths, the lowest one-day increase since March 29. The city now has 1,045 deaths and more than 9,000 confirmed cases. The number of people tested at the Michigan State Fairgrounds reached 1,000 on Thursday for the first time since the outbreak began, Mayor Mike Duggan said.

Duggan continued to express concern for nursing homes in Detroit, where 233 residents and three staff members have died from the coronavirus.

“We’re going to find that a quarter or a third of the deaths occurred at nursing homes and assisted-living facilities,” Duggan said Friday.

In Wayne County, the number of coronavirus deaths rose by 20, one of the lowest one-day increases in a month. The county now has 1,802 deaths and 16,970 confirmed cases.

Oakland County’s death toll increased by nine, pushing its total to 705. The state’s second-largest county now has 7,423 positive cases, up 147 in the past day.

In Macomb County, the number of coronavirus deaths reached 614, an increase of 11. The county reported 110 new cases, bringing its total to 5,623.


Only four of Michigan’s 83 counties have not yet confirmed a case.

In the past 20 days, the number of positive cases in the state’s prisons have nearly tripled, from 335 to 1,560. During the same period, the number of deaths rose from five to 42. Nearly half of the inmates tested for the coronavirus have confirmed infections.

The state has also expanded its testing capacity, which experts say is essential to gauge the scope of the spread and catch early warning signs of a surge. In April, the state averaged 5,500 tests a day.

On Thursday, more than 10,000 people were tested statewide for the first time since the outbreak began.

“If we test more people, we’re going to find more disease,” Dr. Joneigh Khaldun, the state’s chief medical officer, said Friday. “Knowing where the disease is will help us stop the spread.”