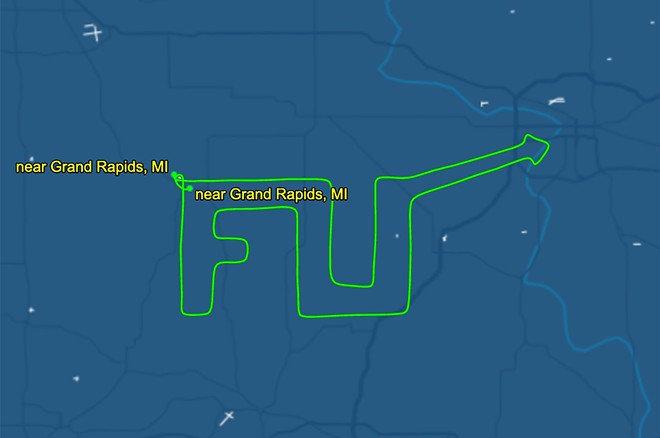 A Grand Rapids-area man vented his frustrations over Gov. Gretchen Whitmer's coronavirus executive orders by spending an hour flying his airplane in a path to spell out the letters "F U."

According to The New York Post, his design also includes an arrow pointing to the governor's mansion, but to us it kind of looks like a dick (which perhaps is very fitting here).

Ed Frederick, 45, says he did it after Whitmer announced her executive order extending the state of emergency through May 28.

"It's a power trip,” Frederick told The Post. "The government, no matter Democrats or Republicans, always seem like they're trying to do something just to prove they're doing something, without weighing the ramifications."

Frederick told The Post he thinks a statewide lockdown goes too far, since most of the coronavirus cases are in metro Detroit. That's a view shared by his neighbor, U.S. Rep. Justin Amash, who is running for president as a Libertarian Party candidate. However, coronavirus cases are on the rise across the state. In Kent, where Grand Rapids is, the number of new cases rose from 626 to 1,479 in 10 days.