The state’s death toll rose to 4,250, up 71 in the past day. Michigan averaged 83 deaths per day in the past week. This is the third week in a row that the average number of new deaths declined. 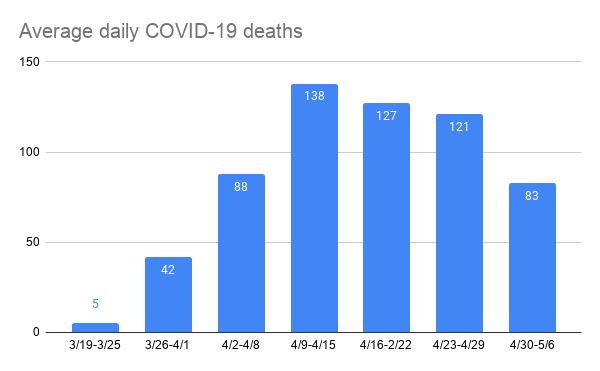 Another sign of progress is the declining rate of people who are testing positive. In early April, about 40% of the people who were tested had COVID-19. That rate has dropped to 8%.

The number of new cases and deaths are falling more rapidly in metro Detroit than anywhere else in the state. In early April, Oakland, Macomb, and Wayne counties accounted for more than 60% of the daily new cases. On Wednesday, the three counties made up just 42% of the new cases.

The west side of the state is seeing the largest increases in confirmed infections. In Kent County, the largest county outside of metro Detroit, the number of positive cases nearly doubled in the past 10 days, from 1,100 to 2,016. Bordering Ottawa County saw its confirmed infections increase 64%, from 191 to 313, during the same period.

In Kalamazoo, the number of new cases rose 96%. Berrien County saw a 59% increase, and Muskegon reported a 43% spike in the past 10 days.

State-run jails are also experiencing a significant rise in new cases and deaths. Over the past 10 days, the number of new cases among inmates nearly doubled, from 1,048 to 1,936. During the same period, the number of deaths jumped from 37 to 48. Inmates filed a class-action lawsuit last week, accusing the Michigan Department of Corrections of failing to adequately protect them.

Detroit reported 27 new coronavirus deaths on Wednesday, bringing its total to 1,128. New York City and Detroit have the same number of COVID-19 deaths per capita — 165.8 per 100,000 residents.

“We didn’t have time to blame anybody with what’s at stake for the African American community,” Duggan said at a news conference Wednesday. “Blaming was a waste of time.”

At the makeshift field hospital at the TCF Center in downtown Detroit, which was designed to house as many as 1,000 COVID-19 patients, there’s only one patient, Duggan said.

“It’s a great accomplishment for everybody in this city,” the mayor said.

The city has tested every nursing-home resident and is now requiring all grocery-store workers to get tested. At the former Michigan State Fairgrounds, the city is testing roughly 1,500 people a day, including asymptomatic employees who interact with the public.

The city’s success with testing was featured on The Rachel Maddow Show on MSNBC on Tuesday.

Gov. Gretchen Whitmer is slowly reopening the economy, beginning with the construction industry this week. She said it may be another two weeks before the next sector is reopened to avoid a second surge in infections.