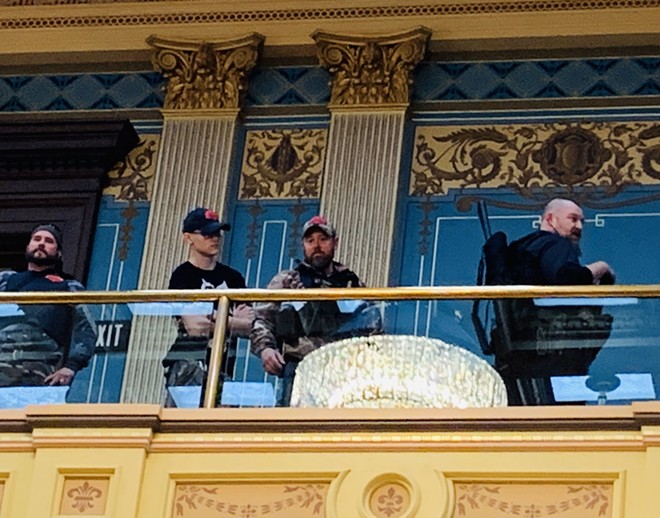 "I think it's long overdue, and I absolutely support that change," Whitmer told NBC News earlier this week. "You shouldn't be intimidated going to be the voice of the people who elected you."

During "Operation Gridlock," a protest against Whitmer's coronavirus response  in mid-April, some armed protesters stood on the Capitol Building lawn and stairs, defying social distancing rules. On April 30, another protest flared up as the Legislature was debating Whitmer's emergency powers, with some armed protesters storming the Capitol Building.

"Directly above me, men with rifles yelling at us," state Sen. Dayna Polehanki tweeted. "Some of my colleagues who own bullet proof vests are wearing them. I have never appreciated our Sergeants-at-Arms more than today."


Even Republican Senate Majority Leader Mike Shirkey, who shared the protesters' belief that Whitmer's coronavirus emergency response goes too far and is choking the economy, called the armed protesters "a bunch of jackasses."

"Their actions hurt their cause and steal from the rights of others by creating an environment where responsible citizens do not feel safe enough to express themselves," he wrote in a statement.

On Wednesday, State Rep. Sarah Anthony, who is Black, was escorted to the Capitol by a security detail that included three armed Black men.

"We were all just appalled by the lack of support and lack of security that I had, that other legislators had, and the fact that a lot of the demonstrators last week were adorning many racist, anti-Semitic signage," she told Lansing City Pulse. "I think it just triggered a lot of folks, especially African Americans."

Michael Lynn Jr., a Black Lansing firefighter and community activist who helped organize Anthony's security detail, said they escorted her to make a point about racial double standards. The majority of the protesters were white, and many held flags and signs with Confederate flags, Swastikas, nooses, and other racist and violent imagery. No arrests were made.

"We want to change the narrative, first of all," he told City Pulse. "We want people to understand that people of color can come out here with guns just the same as anybody else can."

Nessel called mixing guns and debate an "absurdly dangerous combination that would cause the heart of any security expert to skip a beat," The Detroit News reports.

Truscott said he considers Nessel's opinion to be an informal letter, and the issue remains unresolved for now.

Michigan is one of about a dozen states that allows the public to carry firearms inside capitol buildings.