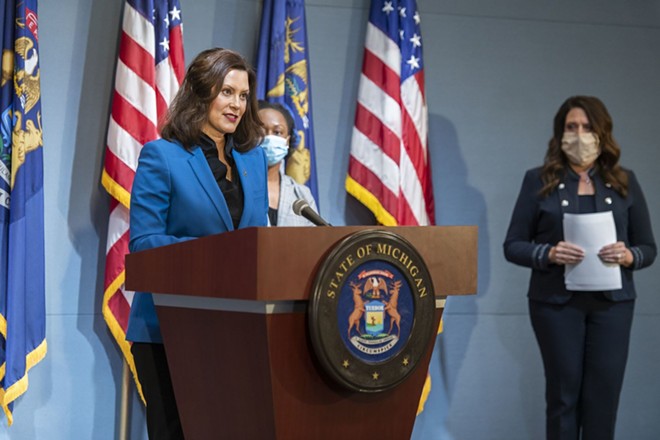 Gov. Gretchen Whitmer called for patience and restraint on Monday as her stay-at-home order continues to curtail the deadly spread of the coronavirus.

In the past three weeks, Michigan has dramatically driven down the rate of new COVID-19 deaths and cases, while boosting its testing capacity. The promising results mean the state is getting closer to phasing in more sectors of the stalled economy, Whitmer said.

The governor spoke out about a Metro Times article published Monday that revealed numerous death threats against her on private Facebook groups over her social-distancing measures.

"People can have any opinion they want, but to threaten someone else, that is beyond the pale, and it is not right and it is contrary to the principles that have founded this great country of ours," Whitmer said at a news conference Monday. "There are a lot of hot tempers right now, and I understand that. In America, we respect people’s right to speak out. Their freedom of speech is something I respect. But they have a duty to do it in a way that doesn’t compromise others or threaten others."

Armed rallies, organized by some of the people making the threats, are planned for Thursday and this weekend at the Capitol in Lansing. Some of the protesters have called for the governor to be hanged, beheaded, shot, or beaten.

Whitmer said she was "very disappointed" by the Michigan State Capitol Commission's decision on Monday to delay voting on whether to ban guns from the building where elected officials work. Five of the six commissioners said they needed more time to determine if they have the legal authority to restrict firearms.

"I do not like what I have seen in the news," Commissioner Kerry Cartkoff said Monday. "We need to do something, but we can’t do it in haste. We need to take a little time to review it and discuss it and decide how we’re going to approach it."

In the meantime, it's unclear how police and Capitol security are going to handle armed protesters amid heightened concerns about violence.

Gov. Gretchen Whitmer: "The violent, racist, extreme rhetoric that has already been connected to Thursday's rally... 'concerning' isn't a strong enough word. And yet this could be avoided if Republican leadership in the legislature would step up & denounce that kind of activity." pic.twitter.com/uWWHcObMpA


Armed militias also have begun lining up around an Owosso barber shop that has opened in defiance of the stay-at-home order. And Shiawassee County Sheriff Brian BeGole said Monday that he will not enforce the order.

Whitmer called on Republicans to speak against the threats and stop using inflammatory rhetoric that encourages residents to defy her social-distancing measures.

"This could be avoided if Republican leadership in the Legislature would step up and denounce that kind of activity," Whitmer said. "I ask anyone with an office or a title or a platform uses it to help bring down the heat in our state. We’re making progress."

The previously overwhelmed health care system is experiencing a dramatic decline in demand. In the past three weeks, the number of COVID-19 patients in a hospital statewide dropped by more than half, from 2,889 to 1,424. During the same period, the number of patients on a ventilator declined from 832 to to 557.

Michigan has also steadily increased its testing capacity. In April, the state tested an average of 5,700 people a day. The state is now testing more than 12,000 people a day, with a goal of testing 30,000 a day in the next month. Abundant testing is critical to reopening the economy so public health officials can identify outbreaks and isolate sick people.

"We are definitely on the right trajectory," the state's top medical officer, Dr. Joneigh Khaldun, said of the coronavirus. "We must remain vigilant as we seek to contain it."