Whitmer is right, the stay-at-home order is working as cases and deaths plummet

For seven straight weeks, Michigan has been under a stay-at-home order to combat the coronavirus.

By all measures, it has worked.

The number of new COVID-19 cases and deaths has fallen for three consecutive weeks. For 26 straight days, the number of coronavirus-related hospitalizations has declined. And over the past 20 days, number of patients on a ventilator has been cut in half.

Michigan is also getting closer to its goal of administering 15,000 tests a day. In the past week, the state averaged 11,500 tests per day, compared to an average of 5,700 a day in April. 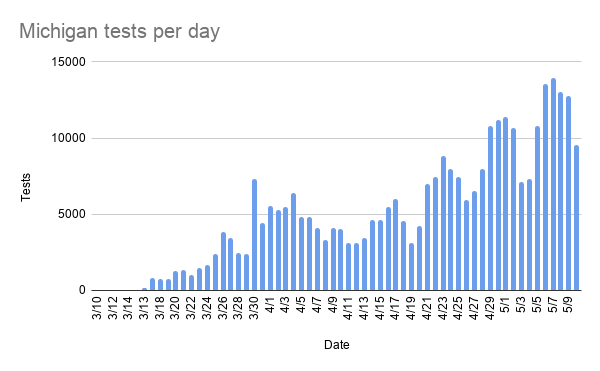 “We are definitely on the right trajectory,” Dr. Joneigh Khaldun, the state’s chief medical executive, said at a news conference Monday.

Despite the progress, protesters plan to descend on the Capitol in Lansing on Thursday, calling for an end to the stay-at-home order.

Gov. Gretchen Whitmer on Monday called on residents to show restraint and patience while the state slowly reopens the economy and bends the coronavirus curve.

“This crisis has taken an unprecedented toll on our families everywhere, but our hard work is paying off,” Whitmer said. “We have taken aggressive action to fight this virus. … We will get through this together.”

Over the past seven days, Michigan reported 499 coronavirus deaths, the lowest weekly total since mid-April. That’s an average of 71 deaths a day, compared 117 deaths a day in April.

In the past week, the state averaged 517 new positive cases a day, down from 733 in the previous week and 900 three weeks ago. 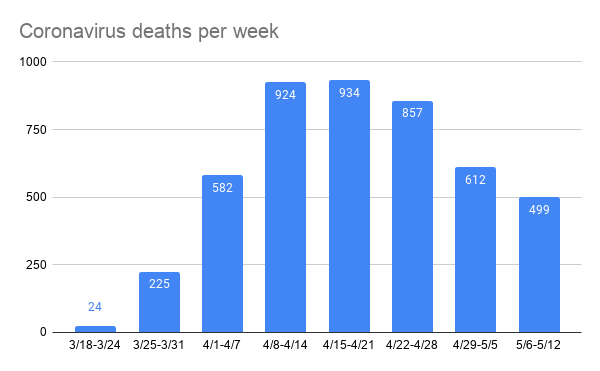 Some parts of the state, including Kent County on the west side and some rural counties in the northern Lower Peninsula, had been experiencing an increasing rate of new cases, but that’s no longer the case.

The stay-at-home order has come at a great cost to Michigan's economy. About 1.33 million residents have filed for unemployment in Michigan since March 15, or more than a quarter of the state's total workforce, and the state has paid out more than $4 billion in unemployment claims.

"Michigan remains near the top of states that have been impacted" by job losses, Whitmer said.

The Michigan Restaurant & Lodging Association estimates the state's hospitality industry has lost more than $1.2 billion in April and nearly 250,000 jobs. And the Small Business Association of Michigan released a survey this week of more than 1,300 small businesses in Michigan that found one in seven Michigan small businesses weren’t confident they would survive the pandemic.

Whitmer said she plans to reopen additional job sectors as early as this month. But for now, she’s encouraging residents to hunker down to avoid a second surge.

“The most important tool we have to fight this virus is social distancing,” she said. “We’re all safer at home.”