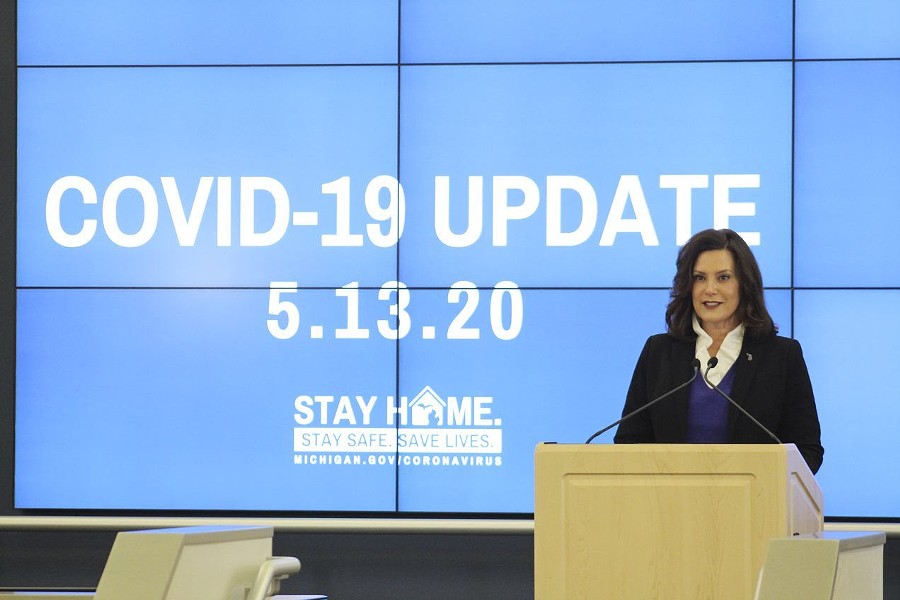 Gov. Gretchen Whitmer expressed concerns about a possible coronavirus outbreak among protesters who plan to rally with no masks Thursday at the Capitol in defiance of social-distancing measures.

“When people congregate, they take it back to their communities,” Whitmer said at a news conference Wednesday. “We’ve seen that over and over again.”

The number of new coronavirus cases and deaths continues to fall, but a new outbreak or second wave could delay plans to reopen more of the economy, Whitmer said.

Michigan Attorney General Dana Nessel on Wednesday warned protesters that her office and Michigan State Police will enforce the law to ensure the rally is peaceful. In the past two weeks, dozens of people have promoted violence against Whitmer, with some calling for an armed rebellion at the next rally.

Worrying that guns are distracting from the message, some of the demonstrators are urging people not to show up with firearms. The debate over bringing guns has caused infighting among protesters on Facebook groups.

“The presence of heavily armed protestors at the Capitol unnecessarily creates a powder keg dynamic that is dangerous to protestors, law enforcement and public servants reporting to work at the Capitol,” Nessel says in a statement. “My office will work in coordination with local authorities and the Michigan State Police to uphold our commitment to public safety.”

A counter protest was planned for Thursday, but has been canceled.

At an April 30 rally, police stood by as protesters, some carrying long guns, flaunted social-distancing measures and tried to force their way through the Capitol building. On Thursday, law enforcement will be more active, the AG’s office said.

“Under Michigan law possession of an openly carried firearm coupled with an intention to create fear in another person could subject an individual to criminal prosecution for brandishing a firearm,” a news statement from MSP and the AG’s Office stated. “Additionally, if a person refuses to obey a lawful directive from a law enforcement officer, that person could be subjected to criminal prosecution for resisting and obstructing.”

Whitmer credited the stay-at-home order for the dramatic decline in new coronavirus cases and deaths over the past three weeks. Michigan’s rate of new cases is falling more rapidly than most states.

Michigan reported 40 new coronavirus cases Wednesday, bringing its total to 4,714. The state now has the fourth highest number of deaths in the country, behind New York, New Jersey, and Massachusetts.

In the past week, Michigan averaged 67 deaths, compared to 83 in the previous week. During the peak of the outbreak in mid-April, the state averaged more than 135 deaths a day.

Without social-distancing, researchers estimate roughly 3,500 more people would have died in the state, Whitmer said.

Michigan reported 370 new coronavirus cases in the past 24 hours, pushing its total to 48,391. The state averaged 478 new cases this week, compared to 665 in the previous week.

To ease more restrictions, Whitmer said, the decline must continue while the state ramps up its testing capacity. The state averaged 12,300 tests a day in the past week, compared to 5,710 a day in April.

Another prerequisite for easing restrictions is ample space in hospitals, which were overwhelmed in southeast Michigan in March and April. In the past four weeks, the number of COVID-19 patients in the hospital has fallen from nearly 4,000 to 1,300, according to the Michigan Department of Health and Human Services.

In light of the progress, Dr. Joneigh Khaldun, the state’s chief medical executive, urged residents to not become complacent.

“Social distancing is working, our numbers are improving, but we are still seeing many more cases every day and more deaths,” Khaldun said. “I encourage everyone to remain patient and diligent.”