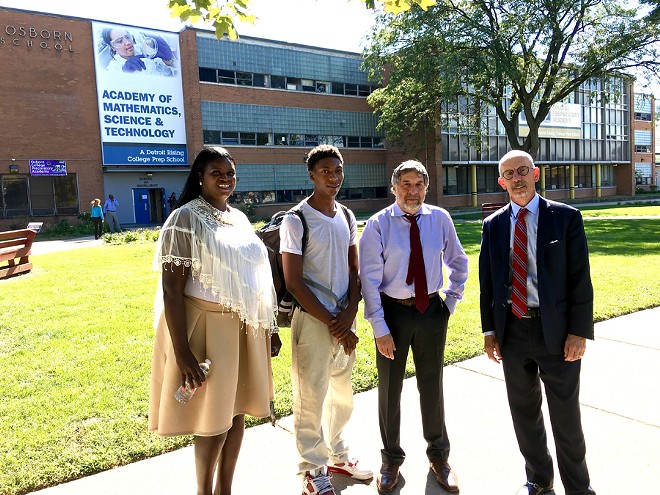 In the wee hours of Thursday morning, Gov. Gretchen Whitmer's office sent out a press release saying that a settlement had been reached in the landmark lawsuit in which Detroit students sued the state, arguing that they were denied their fundamental right to an education while the schools were under state-appointed emergency management.

Under the terms of the settlement, the seven Detroit students who signed on as plaintiffs in the case won $280,000, and Detroit Public Schools Community District will receive $2.72 million to fund literacy-related programming.

Gary B., et al. v. Whitmer, et al. was first filed in 2016 against Whitmer's predecessor, Rick Snyder, and other state departments and officials, arguing that conditions had deteriorated under the school district's emergency management and that learning was impossible. In 2017, the state moved to dismiss the case, arguing students have no constitutional right to an education, covered in a 2017 Metro Times cover story.

In 2018, U.S. District Judge Stephen Murphy III agreed. But last month, a federal appeals court sided with the students in a landmark ruling.

"The state provision of a basic minimum education has a longstanding presence in our history and tradition, and is essential to our concept of ordered constitutional liberty," the U.S. Sixth Circuit Court of Appeals ruled. "Under the Supreme Court’s substantive due process cases, this suggests it should be recognized as a fundamental right."

"I have always said that every student, no matter where they come from, has a birthright to a quality public education,” Whitmer said in a statement. "Students in Detroit faced obstacles to their education that inhibited their ability to read — obstacles they never should have faced. In the future, I will remain committed to ensuring paths to literacy for children across Michigan."

Whitmer added that, "Today’s settlement is a good start, but there’s more work to do to create paths to opportunity for our children. I look forward to working with the legislature to provide funding for Detroit schools and districts across the state to help ensure educators and students have the resources they need for success."

The $280,000 will be shared among the seven students "to access a high-quality literacy program or otherwise further their education." The funds will be held in trust by the Detroit Public Schools Foundation.

Beyond that, Whitmer agreed to propose legislation that would provide the Detroit Public Schools Community District with at least $94.4 million in funding for literacy-related programs and initiatives.