If President Donald Trump and elusive Republican Senate hopeful John James had a relationship status, it would undoubtedly be “it's complicated.” Or at least that's what James' recent statements, past actions, and even a recent Zoom background seem to suggest.

As Trump's support wanes across the country in the wake of his mishandling of the coronavirus pandemic (a recent poll puts presumptive Democratic nominee Joe Biden ahead by 11 points), he may be losing support in one of his little soldiers. Or not. It's honestly hard to tell.

John James will be a GREAT Senator for Michigan! https://t.co/yGiWzZ9nR0


It started last year when it was reported that the Farmington Hills businessman and military veteran had scrubbed his social media pages and YouTube channel following the 2018 election. Posts in which James said he supported Trump “2000%” and the President's efforts to repeal the Affordable Care Act were among those deleted. At the time, his team alleged that the removal of content was to create a more “user-friendly” experience.

Then, during a GOP Reagan Dinner in Macomb County last year, James, who was a featured speaker at the event, posted photos that appeared to strategically crop out the giant gold foil letter balloons that spelled out “TRUMP,” which were prominently and unavoidably displayed behind him as he spoke.

It was great to be in Shelby Township tonight. Macomb County is home to so many Co-Pilots! Join them by visiting our website: https://t.co/61kvruzqgJ 🦅🇺🇸#TeamJohnJames #LetsFlyMI pic.twitter.com/PDI8EjPMJO


The flip-flopping doesn't stop there.

In a conversation with The Detroit News this month, James said he feels comfortable pushing back against Trump when it comes to disagreeing on policies, especially those that impact Michigan. 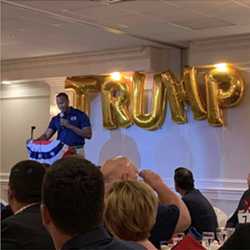 “When the president is right on what he’s doing for Michigan, I’ll support him," James said on May 9. “And when I disagree with him, I will let him know. It benefits the state of Michigan to have that perspective and that voice.”

During a Zoom conference with Black community leaders, James dragged some of Trump's policies and past statements, Politico reported. “Plenty, plenty of issues,” James said of Trump. “Everything from cutting Great Lakes funding to ‘shithole countries’ to speaking ill of the dead.” I mean, where do you want to start?” (At one point during a speaking event in Ohio, less than a year after Senator John McCain died of brain cancer, Trump whined that he was never properly thanked for approving McCain's funeral arrangements.)

James continued, “And so yes, there's gonna be places that I disagree with the president and those are just a couple.”

During the Zoom conference, James appeared to have swapped a framed photo of a visit to the Oval Office, where he is pictured standing beside Trump, to a document with some text and what appears to be a child's footprint. The photo with Trump, however, was on full display during a recent Zoom fundraiser with Donald Trump, Jr. The switcheroo was pointed out on Twitter by Lachlan Markay of The Daily Beast.

This is pretty funny. John James tweeted a pic from this Zoom fundraiser. Note the photo of him with Trump in the Oval on his bookshelf, and compare to the screenshot of his forum with African American leaders earlier this month pic.twitter.com/fqo19Tq6uc


While it may seem like nothing more than some redecorating, it speaks to James' conscious indecisiveness. James — who has previously taken campaign money from groups linked to white supremacists, ran a campaign ad for his previous Senate run that featured a swastika, and has a “blood brother” in Ted Nugent — is now touting an unironic political strategy of “people not politics.”

In a recently released campaign ad, James is seen driving a car, later asking viewers and voters to “come along” with him before delivering a rejected action-movie line: “let's fly.”

If only James knew where the fuck he was going.