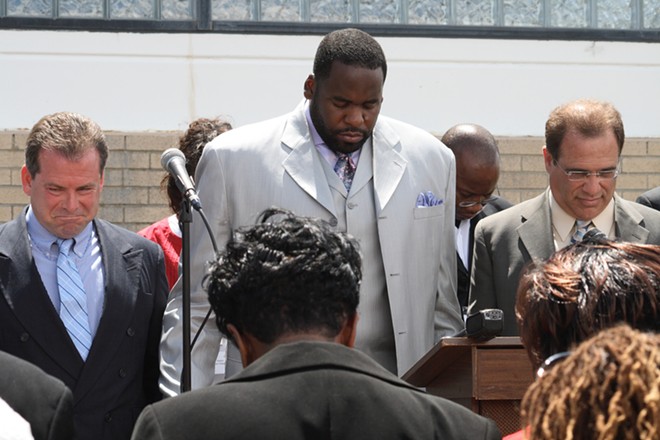 Detroit Mayor Mike Duggan spoke highly of Kwame Kilpatrick on Friday and offered to help the former mayor get “a fresh start,” if news of Kilpatrick’s prison release is true.

Duggan has deep ties with the Kilpatrick family, having worked with Kilpatrick’s father, Bernard Kilpatrick, who was the chief of staff for former Wayne County Executive Ed McNamara while Duggan was the deputy county executive. Duggan also played a key role in Kwame Kilpatrick’s mayoral bid in 2001.

“He is one of the most extraordinarily talented people I've ever met," Duggan said at a coronavirus news conference Friday. “I think he has a lot to contribute. And if in fact the reports are true, I will do everything I can to help give him a fresh start.”

Numerous news outlets reported Friday that Kilpatrick is expected to be released from prison next month as part of a federal initiative to release thousands of inmates from prisons amid the deadly spread of the coronavirus. Kilpatrick is serving a 28-year sentence in a Louisiana prison, where an inmate died from the coronavirus in March.

Kilpatrick was convicted of two dozen federal charges, ranging from racketeering to extortion, in October 2013. He wasn’t eligible for parole until 2037.

Related Kwame Kilpatrick got 28 years for financial crimes, Paul Manafort got only 7.5 — why?

Kwame Kilpatrick got 28 years for financial crimes, Paul Manafort got only 7.5 — why?
By Tom Perkins
News Hits
It’s unclear whether Kilpatrick, if released early, will be ordered to serve house arrest.

Duggan said he remembers watching Kilpatrick’s twin children at the county building, when the young Kilpatrick was studying for law school in his father’s office, which was adjacent to Duggan's.

“My connection to Kwame Kilpatrick is very personal,” Duggan said. “I knew him since he was in high school.”

State Rep. Karen Whitsett, D-Detroit, said she spoke about Kilpatrick with President Trump when he was at a Ford plant in Ypsilanti yesterday. She said the White House confirmed Kilpatrick was going to be released soon.

“I think it’s only right,” Whitsett told The Detroit News. “He served his time, and I think the time that he was given was in excess.”