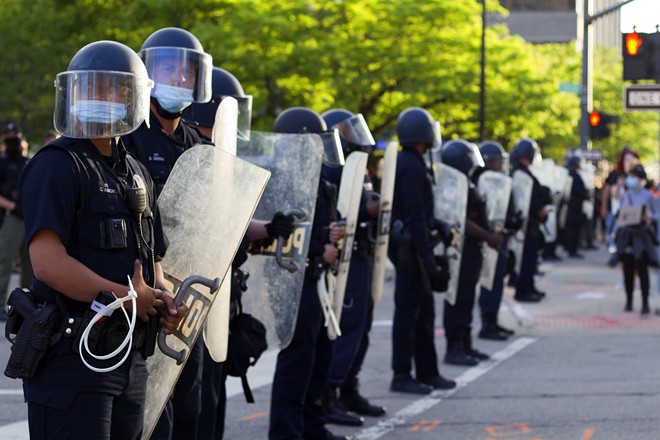 Protesters are planning to gather in downtown Detroit for a third straight day to rally against police brutality and the death of George Floyd at the hands of Minneapolis cops after a demonstration turned ugly Saturday night.

Detroit police used pepper spray on protesters and some journalists on Saturday night after showing restraint for most of the past two days. Detroit is investigating two cops who were seen pushing a protester to the ground, a city official confirmed

“We did not want them to come too close to our building for obvious reasons, and that’s when the protesters turned violent,” Craig said during an interview streamed on Facebook. “They began to throw projectiles, from rocks and M-80 grenades, at officers. We learned that a number of them came with ice chests that had a number of bricks. So it became a violent situation at that point.”

At one point, an officer swatted a recording device from the hands of a Free Press journalist. Other reporters were peppers-sprayed.

ALERT: Something transpired, and about 20 cops just dog piled on a protester, one was seen dragging another protestor, and then a cop just slapped the #Detroit @freep reporter’s device out of her hand and the stream went dead. #DetroitProtest #georgefloyd pic.twitter.com/VbkLC6Jq74


Both rallies started off peacefully, and local organizers were calling on protesters to show restraint.

A protest organizer from Detroit’s east side urged demonstrators to stick with the group and avoid confrontations. As the day turned into night, groups split off and confronted police. pic.twitter.com/Y3QlrHqERG


On Friday, some protesters attacked police cars with rocks, bricks, and bottles. When the sun went down both nights, some smaller groups began confronting police.


Protests turned violent in cities across the nation, including in Grand Rapids, where windows were smashed and cars were lit on fire.

This is video of 5 cars on fire in downtown Grand Rapids right now. pic.twitter.com/oxqsGQClvL