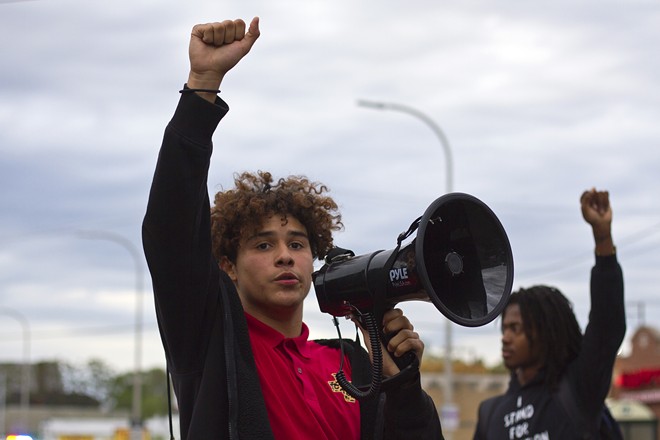 Dozens of Detroit police in riot gear were lined up on Michigan Avenue on Monday night, facing hundreds of protesters who were refusing to budge in defiance of an 8 p.m. curfew.

What looked like an inevitable clash between heavily armed cops and peaceful protesters was avoided after 16-year-old Stefan Perez, who was one of the rally’s leaders, used his megaphone to urge demonstrators to disperse.

It wasn’t an easy decision for the Southwest Detroit resident. He was in tears, worried that he had let protesters down. But nonviolent activists assured him he did the right thing.

“I care about the message,” Perez told reporters as demonstrators dispersed. “I could have worn a hoodie and a mask the whole time, but people wouldn’t have heard me that way. They heard me this way.”

16-year-old Stephen Perez led today’s rally with hundreds of protesters through southwest Detroit. He called for protesters to stand down to avoid a confrontation. pic.twitter.com/G02u4jiXol


In the middle of the interview, a stranger handed Perez a phone. Mayor Mike Duggan was on the other line. The mayor commended Perez for helping lead the protest and urging for a peaceful end of the night.

Duggan announced an 8 p.m. curfew for the next seven days beginning Monday.

The march began shortly before 5 p.m. at Detroit Public Safety Headquarters. Protesters peacefully marched with signs for several miles though Southwest Detroit and eventually walked down Michigan Avenue with arms locked. They were met by a long line of police in riot shields and helmets.

Police still made 40 arrests, mostly for curfew violations. Of those, 16 were people from Detroit, and the rest were from the suburbs, Sgt. Nicole Kirkwood tells Metro Times.

On Sunday night, police fired tear gas, flash grenades, and rubber bullets into a peaceful crowd that was refusing to disperse.

Another anti-police brutality rally is planned Tuesday at 4 p.m. at Public Safety Headquarters.