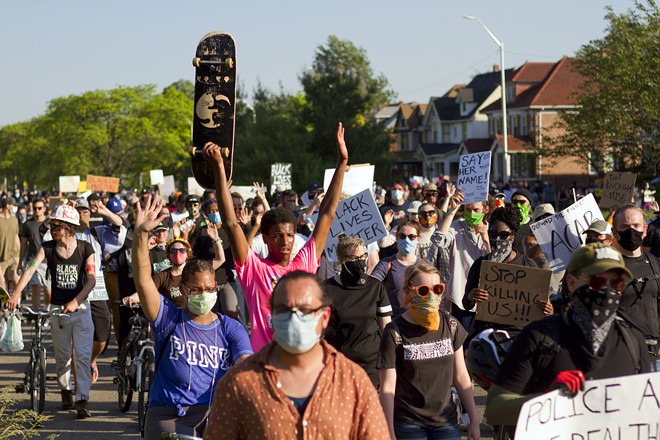 Mayor Mike Duggan said the city’s curfew will remain in effect for at least two more days as protesters plan to continue rallying against police brutality in the aftermath of George Floyd’s death in Minneapolis.

“We are not very far from the day when we don’t need a curfew,” Duggan said at a news conference Thursday. “We know every day we could end up like all the other cities in the Midwest. We’re hoping we can get through this with unity and no more conflict.” Other cities, including Lansing and Grand Rapids, have seen vandalism including smashed windows and cars being lit on fire.

Duggan also suggested the city is considering dismissing the curfew violations for about 300 people who have been arrested during protests in the past week in Detroit.

“We’re going to look at that over the next week,” Duggan said.

On the sixth straight day of protests on Wednesday, the police department did not enforce the curfew because the rally was peaceful. It was the first rally that ended with no arrests since the protests began Friday.

Duggan said he imposed the 8 p.m. curfew because he was afraid “we would lose our city” to what he described as outside agitators who occasionally threw rocks, bottles and fireworks at police.

Police Chief James Craig said he would be closely monitoring Thursday’s rally before deciding whether to enforce the curfew with arrests.

More than 100 officers arrested 127 peaceful protesters on Tuesday night on Gratiot near Conner, throwing many of them to the ground and dragging them to police vehicles. Police attacked several reporters who were wearing press credentials provided by the city.

Craig and Duggan defended the curfew and the police actions, citing several clashes with protesters over the weekend.

Duggan said he trusts Craig to make the right decisions, adding, “I happen to think we may have the best police chief in America.”