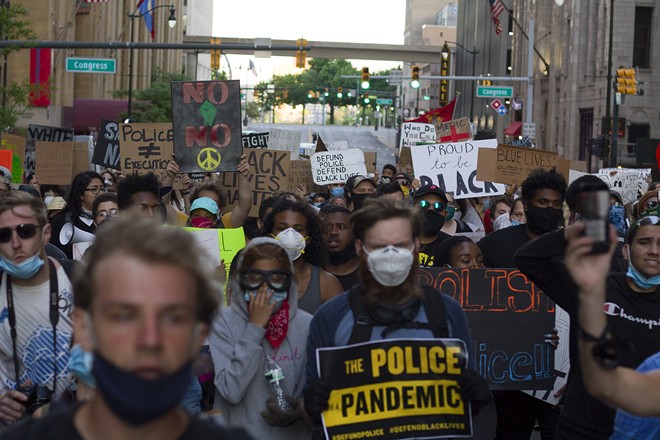 Protesters are planning to meet with Mayor Mike Duggan this week to discuss their demands after 10 straight days of demonstrations in Detroit over police brutality and systemic racism.

About a third of the city’s $1 billion budget goes to the Detroit Police Department. Protesters want the city to reallocate much of that money to social services and other community resources.

Duggan’s office confirmed the mayor plans to meet with protesters this week.

“We’re working on setting the date and time with them now,” Duggan’s spokesman John Roach tells Metro Times. “Expect it to be in the next day or two.”

In an interview with right-wing Fox News, Chief James Craig scoffed at calls to defund the police department.

“It’s a knee-jerk reaction, not well thought out, and frankly this one-size-fits-all is just misguided,” Craig said.

Michigan Republican Party Chairwoman Laura Cox retweeted the interview Monday morning, saying the "'defund the police'” rhetoric is dangerous, and only threatens to expose our communities to more risk."

We can seek comprehensive law enforcement reforms that don’t defund the good police officers who signed up to protect and serve our neighborhoods.

The “defund the police” rhetoric is dangerous, and only threatens to expose our communities to more risk. https://t.co/j62KMtfgbR


Other cities are beginning to meet some of the demands of protesters. In Minneapolis, where four police officers were involved in the death of George Floyd, officials banned the use of chokeholds and neck restraints. A majority of the Minneapolis City Council has pledged to “begin the process of ending” the police department.

In California, the governor ordered an end to the use of so-called “sleeper holds,” which block the flow of blood to the brain.

Defunding the police is not as radical as many people think. For some, it means reducing the police budget and transferring the money to other forms of public safety, such as housing, mental healthcare, and substance abuse.

Protesters point out that the roots of the current American policing system are racist, beginning with slave patrols. After emancipation, newly freed Black Americans were pushed into forced labor for crimes like “vagrancy.” Prisons are disproportionately filled with Black people.

Local protesters also want to reestablish the residency requirement for police. Studies have long shown that police are less likely to use excessive force if they live in the city in which they work.

Detroit protesters talk about some of their demands to reform policing and jails. pic.twitter.com/Hpd6pLRy1I


In the past week, Detroit police have arrested more than 300 protesters, a vast majority of whom were peaceful. Numerous complaints have been lodged against DPD for firing rubber bullets, tear gas, and flash bang grenades into peaceful crowds, using excessive force to enforce the curfew, and arresting journalists and legal observers.

Similar scenes have played out across the country, demonstrating the need to drastically reform policing.