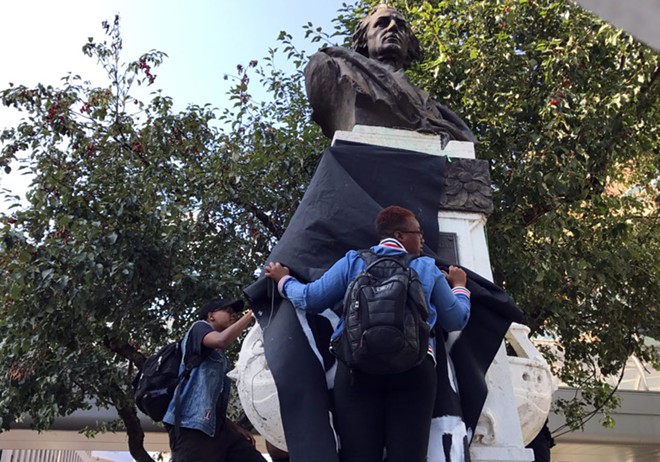 The City of Detroit removed its 110-year-old Christopher Columbus statue on Monday.

Mayor Mike Duggan ordered the removal of the statue, which has been standing at Jefferson Avenue and Randolph downtown since the late 1980s.

“The mayor decided it ought to be placed in storage to give us time to reevaluate the appropriate long-term disposition of the statue,” mayoral spokesman John Roach tells Metro Times.

In recent weeks, protesters nationwide have torn down, destroyed, and defaced statues memorializing racists amid the Black Lives Matter protests in the wake of the death of George Floyd.

The statue was dedicated to the city of Detroit on Oct. 12, 1910, and originally sat at the north end of Washington Boulevard at Grand Circus Park.

A local activist group called for the statue to be removed in August 2017, saying Columbus represents violence and genocide, and his statue symbolizes mass slaughter.

Columbus advocated fighting and enslaving native groups because he perceived them as cannibals. Those who weren’t killed often were forced to mine gold under brutal conditions. Columbus and his crew also sold nearly 1,500 enslaved islanders to Europe.

On Columbus Day in 2015, someone vandalized Detroit's Columbus statue, making it look like a bloody hatchet blow to the statue's head.

Earlier this month, a statue of former Dearborn Mayor Orville Hubbard, a staunch segregationist, was put into storage after someone put a Black Lives Matter T-shirt on it.

In recent years, Duggan called for Cobo Center to be renamed because it was named after former Mayor Albert Cobo, a racist who ran on a platform of "Negro removal." It's now called TCF Center.