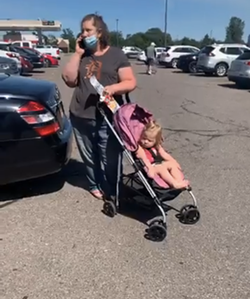 It's official, the Karens have gone wild and they're everywhere.

They're in the park, they're calling the cops over sidewalk chalk art, they're wearing bucket hats going on racist tirades over parking spaces, they're having meltdowns in their car over having to wear a face mask in public, and, apparently, they're also valued Kroger customers.

The reason? The woman was upset that, while shopping, one of Montgomery-Strickland's kids stood on a shelf to reach Gatorade on a higher shelf, which was enough for the woman to berate her and her family as they continued to shop.

Things escalated in the parking lot, however, after the woman dropped off her groceries to her vehicle so that she could find Montgomery-Strickland and her car. She then proceeded to stand behind it, preventing her from backing out and called Montgomery-Strickland a “bitch,” at which point the Southfield mother called the police.

Montgomery-Strickland says she was in the middle of food delivery.

“I don't want my kids to see this mess,” she says in the video as they await the cops' arrival.

“All this stuff going on out here, with protesting and everything and this is what this woman is doing, refusing to get out from behind my car.”

When police arrive, Karen finally abandons her post from behind the car and makes a beeline to get to the cops first. A Kroger employee backs Montgomery-Strickland's account of the events to the police, while an officer asks her to delete the video per Karen's request.

“There's enough going on out here, I'm not going to allow it,” Montgomery-Strickland says.” I don't have to. I don't want to.”

A second officer asks her to delete the video, and she continued to refuse.

In a follow-up video posted to Montgomery-Strickland's Facebook page, she details the events, describing the incident as one of the “craziest” things she's ever experienced. The police ended up letting her go without any issues but it wasn't clear what became of Kroger Karen.

One of Strickland's children then suggests the Karen happened to catch his mom “on a great day.”

“She did catch me on a great day.”

Despite the encounter messing up her delivery schedule, Montgomery-Strickland says taking time to post it came down to “the principle of the disrespect.”

The same kid chimes in, “And she was racist.