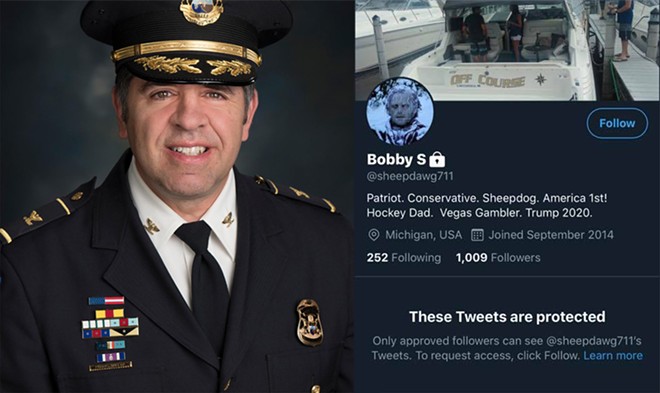 Shelby Township Police Chief Robert J. Shelide — aka the recently revealed identity of nasty Metro Times troll @sheepdawg711 — has been suspended for 30 days without pay and ordered to take sensitivity training after tweets surfaced in which he glorified police brutality and called people "barbarians" and "subhumans."

But Shelby Township trustees decided on Tuesday that Shelide will not lose his job over the inflammatory tweets in a 5-2 vote, The Detroit News reports.

Shelide admitted the account was his shortly after the police department said it put him on a leave of absence while it investigated the matter. At a Zoom video conference meeting on Tuesday, Shelide said "I am not a racist" and "I don't deserve to lose my employment over this. People deserve a second chance."

Shelide's comments and the Shelby Township trustees' decision not to fire him drew condemnation from hundreds of concerned citizens at a time when mass protests have erupted across the world against police brutality.

"Bad attitudes can negatively affect how police officers deal with lawbreakers, or worse, non-white residents who have done nothing wrong, which creates an adversarial relationship between Shelby Township and its police," trustee Richard Stathakis said, according to the News.

"Trump threatening to deploy the military. I have a better idea: unleash real cops and let them take care of these barbarians," he wrote. "I promise it will be over in 24 hours. Cops are crippled by politicians and the media."

In another tweet showing footage of Black suspects who allegedly attacked a business store owner, @sheepdawg711 wrote, "Wild savages. I wish to God I would have been there. Body bags for these vicious subhumans."